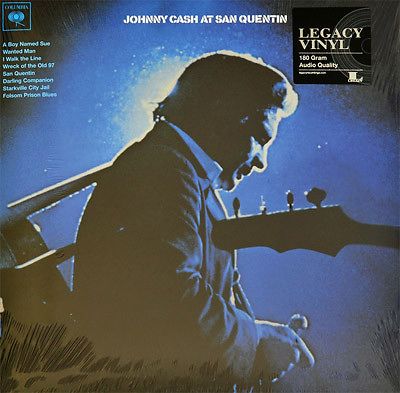 At San Quentin is the 31st overall album by Johnny Cash, recorded live at San Quentin State Prison on February 24, 1969 and released on June 4 of that same year. The concert was filmed by Granada Television, produced and directed by Michael Darlow. The album was the second in Cash's conceptual series of live prison albums that also included "At Folsom Prison" (1968), "Pa Osteraker" (1973), and "A Concert Behind Prison Walls" (1976).

The album was certified gold on August 12, 1969, platinum and double platinum on November 21, 1986, and triple platinum on March 27, 2003 by the RIAA. It is the second best selling live album of all time surpassed only by its conceptual predecessor, "At Folsom Prison". The album was nominated for a number of Grammy Awards, including Album of the Year and won Best Male Country Vocal Performance for "A Boy Named Sue."

The album cover photo by Jim Marshall is considered to be an iconic image of Cash, with Marshall Grant's Epiphone Newport bass guitar famously silhouetted in the foreground.