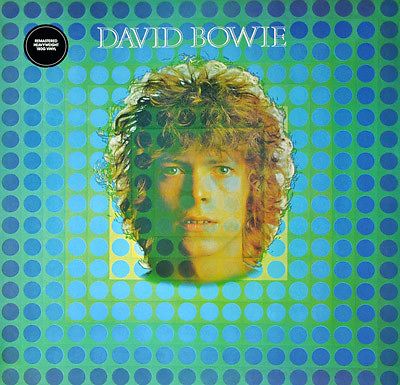 David Bowie is the second studio album by the English musician David Bowie, released under that title by Philips in the UK, and as Man of Words/Man of Music by Mercury in the US, on 14 November 1969. It was reissued in 1972 by RCA Records as Space Oddity (the title of the opening track, which had reached No. 5 in the UK Singles Chart). Space Oddity was the name used for CD releases of the album in 1984, 1990 and 1999, but it reverted to the original, eponymous title for 2009 and 2015 reissues.

Regarding its mix of folk, balladry and prog rock, NME editors Roy Carr and Charles Shaar Murray have said, "Some of it belonged in '67 and some of it in '72, but in 1969 it all seemed vastly incongruous. Basically, David Bowie can be viewed in retrospect as all that Bowie had been and a little of what he would become, all jumbled up and fighting for control..."

The album came about after Bowie had made the transition from a cabaret/avant-garde-inspired musician to a hippie/folk-based sound and as such the album is a major turning point from his 1967 debut.

"Don't Sit Down", an unlisted 40-second jam heard after the album's second song on the UK Philips LP, was excluded from the US Mercury release and from the 1972 RCA reissue. The piece was included once again -- and listed as an independent track -- on CD releases of the album in the 1990s. The 2009 and 2015 reissues returned the piece to its original status as a hidden track.

Βy January 2017, it had sold over 7.6 million album-equivalent units worldwide.