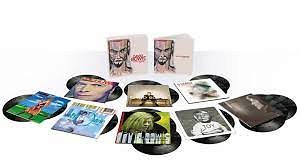 Parlophone Records are proud to announce two David Bowie landmarks: 26th November 2021 will see the release of DAVID BOWIE 5. BRILLIANT ADVENTURE (1992 – 2001), the fifth in a series of box sets chronicling his career from 1969 to the 21st century.

The Buddha Of Suburbia (a very limited release on vinyl previously, remastered) (2LP)