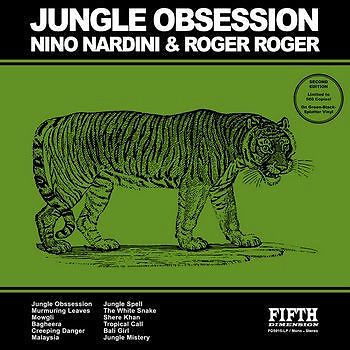 Offficial reissue of this classic library album comes as a 50th anniversary edition on 180 grams vinyl with two bonus tracks. Farfalla Records presents a reissue of Jungle Obsession by Nino Nardini & Roger Roger. On this LP, they present their own musical vision of The Jungle Book.

Released in 1971, under the blanket of library music anonymity, Jungle Obsession is one of those rare and precious records whose extraordinary personality is instantly recognised by the ear of the listener. Timelessluminous!! Though it may look like a sexy piece of exotica from the heyday of tiki culture -- the '50s and early '60s -- Jungle Obsession was originally released in 1971 by the French Neuilly label. Nino Nardini was a master of library music for movies, TV series, and other media back then, and this album is his interpretation of what legends like Martin Denny and Frank Hunter had created a decade before -- the ultimate listening experience for people who needed to escape from the struggle of everyday life through dreamy music that combined easy, relaxed jazz with jungle sounds and colorful melodies to create an atmosphere of exotic places. Nardini refreshes those -- already ancient by 1971 -- musical values with more contemporary elements of hot-blooded funk, particularly its wild percussion patterns, sweet wah-wah guitars, and an ever-present, rocking rhythm section. Blues and psychedelic rock flow gently into the mix to expand the effect on the listener's imagination. Lush, with great arrangements of grandiose string patterns that evoke an atmosphere of great mysticism and a peaceful world of swirling colors. The earthy rock aspect of the music then comes to the fore, bringing the listener back to smoky urban clubs, where the air is heavy and sweat drips from the ceiling. All in all this is a beautiful soundtrack for fans of both worlds -- the urban funk of the early '70s and the dreamy exotica music of the '50s and '60s. Both styles come close to each other and at some points blend together. Jungle Obsession is a fine example of well-executed 1970s library music, conjuring up a movie in the listener's head with its variety of moods. Sheer excitement if you can catch the flow.