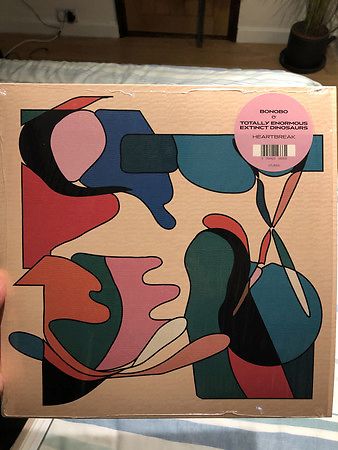 Black Paper Inner 12” Card Insert with liner notes from Tim Lawrence on the Class Acton “Weekend” Sample (Tim Lawrence is author of “Life and Death on the New York Dancefloor: 1980-83”).

‘Heartbreak’ sees Simon Green, aka Bonobo team up with fellow producer Totally Enormous Extinct Dinosaurs to deliver a dancefloor-driven 12” that builds on some of the foundations of electronic music, tracing a line from 1980’s NYC through to the warehouse parties of today.

Having both settled in LA around 2015, the two UK artists quickly struck up a friendship. With subsequent years spent performing at each other’s gigs and exchanging demos, they finally got into the studio together to record “Heartbreak” and B-side “6,000 Ft.”. “Orlando (Totally Enormous Extinct Dinosaurs) was playing me a fairly stripped back idea he had for something last year,” says Green. “We spent a few afternoons in his studio trying ideas out and eventually, ‘Heartbreak’ was the end result.”

With the sample at its core, the track sees both artists pay their respects to one of the formative scenes in electronic music, with additional liner notes from author Tim Lawrence provided on the 12”, giving insights into the history and evolution of “Weekend” and the lasting impact it had on the electronic music of today. "Now more than ever it feels important to be putting out dance music with deliberate acknowledgment of its history.” says Orlando. “It's great to be releasing music with Simon, not to mention the first release on his label."