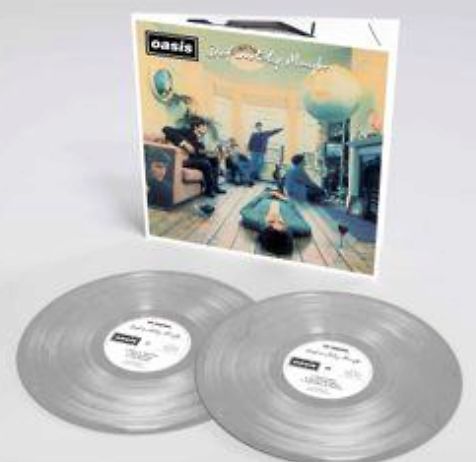 Limited 25th birthday edition! Still fresh and relevant as in 1994. 2 LP on Silver Vinyl.
€ 29,95
Add to wishlist
PICK-UP AT SHOP / FREE SHIPPING FOR ORDERS WITHIN BELGIUM AND EXCEEDING € 60 (FYI: we notice delays at Bpost which are out of our hands, if you want to be a 100% sure about delivery date, best choose pick-up) / Shipping costs are dependent on various factors and are calculated in your shopping cart. Add this item to your cart to see the shipping cost. Or pick up your order at our store in Ghent.

Originally released on August 29th 1994, ‘Definitely Maybe’ was the fastest-ever selling debut album in the UK at the time, and marked the point when Oasis became a cultural phenomenon. The album went seven times platinum in the UK while selling over five million copies worldwide. The four singles – ‘Supersonic’, ‘Shakermaker’, ‘Live Forever’ and ‘Cigarettes And Alcohol ‘ are established classics while songs that were never released outside of the album’s confines such as ‘Rock ‘n’ Roll Star’ and ‘Slide Away’ also remain anthems and radio staples known to every generation of music fan.

‘Definitely Maybe’ frequently appears on ‘best album of all time’ polls and is widely considered to be the best debut album ever made. A quarter of a century following its release, it’s songs sound as fresh and relevant as they did in 1994.