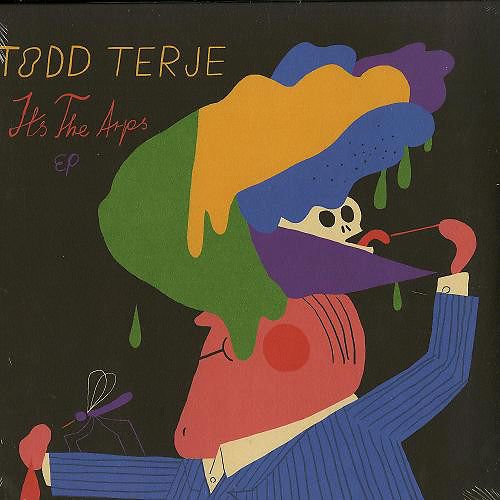 When Todd Terje's Ragysh came out, Jack Haighton mused on the implausibility of the record being as good as it was. Terje had released the widely loved Eurodans in 2005, then pretty much gone silent—who'd have expected him to bounce back five years later with an even more explosive EP? But Ragysh was precisely that: a galvanizing club hit that thrust Terje back into the spotlight. And while dance floors around the world were still soaking up "Ragysh" and "Snooze 4 Love" (neither has lost its luster today), Terje had another ace up his sleeve: It's the Arps, a glistening modern disco EP that, at the risk of splitting hairs, is probably his finest yet.

"Inspector Norse" is one of those tracks whose reputation precedes it: DJs close to Terje have been playing it out since last fall, and it had thousands of views on YouTube leading up to its release. It's also one of those tracks that ends up defining a night out, with vivid details and a soaring melody that are seared into your memory the next day. In one sense it's an exercise in analog production—as with the rest of the EP, it was made entirely on the ARP 2600, a semi-modular synth favored by everyone from Jarre to Soulwax. But it also reflects a truly gifted songwriter at work. Since the early days of disco (at least), countless artists have groped for something that Terje utterly nails here: the elusive feeling of having a supremely, impossibly good time. It's this feeling that makes much of club music worthwhile, and you'd be hard-pressed to find a better example of it than the moment about three and a half minutes into "Inspector Norse," when the whole thing gradually swells and then pops.

It's the Arps admittedly lacks the two-punch quality of Ragysh—there's no "Snooze 4 Love" here—but taken as a whole it's more well-rounded. Much like EPs by Moodymann or Berlin's fantastic Acido Records, it's built to be played from beginning to end, with colorful interludes connecting the main attractions. The first of these is "Myggsommer," a detour that's part Balearic and part Drexciyan sci-fi, the second is "Swing Star (Pt 1)," a 160 BPM arpeggio-fest that recalls Tangerine Dream's "Love On a Real Train." This one drops neatly into "Swing Star (Pt 2)," a late-night cosmic disco tune that's cut from the same cloth as Space Dimension Controller's Temporary Thrillz. It's not as magical as "Inspector Norse" or some of Terje's past efforts, but on an EP as great as this, who cares? If It's the Arps isn't one of 2012's best records then we've got a lot to look forward to.