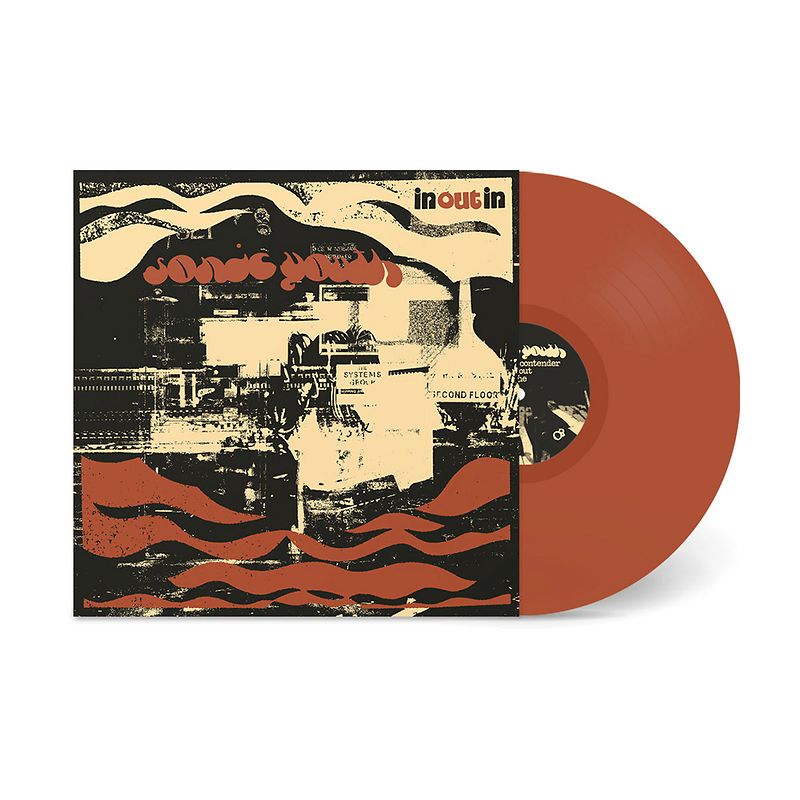 In mulling over their career, it’s staggering to realize that Sonic Youth not only delivered a healthy slab of releases as a unit but also have a myriad of shelved material still waiting for broader ears. While the group’s current Bandcamp abode lays out a generous amount of it, a bunch more has yet to surface. And it’s a massive mountain to chip away at in the sense of the group output alone; individual members’ projects are a whole other game, needless to say. "In/Out/In" ably delivers a new slab of mostly-unheard Sonic righteousness, with a scope on the post 2000-era band in especially zoned/exploratory regions.

The 80’s and 90’s continually saw Sonic Youth reminding everyone that their jams ran free alongside song craft and visible development album to album; there were Peel excursions, dipping toes into soundtrack work starting with 1986’s "Made In USA", and of course great impromptu expansive takes of tried and true previous material onstage. The millennial establishment of home turf studio spaces in NYC then NJ greatly egged on forays into improvisation and composition on their own clock as evidenced in "Goodbye 20th Century" and the plethora of SYR releases that trickled out side by side between major release albums. At this juncture they had already created a cultural template for a whole new breed of rock heads who, in turn, entered a feedback loop to SY itself, which cultivated more of its own new moves informed by the very fandom they had for their acolytes all the while pushing the band outward to uncharted fields. Jim O’Rourke’s residency had already influenced the band’s material in part into denser, longer, meditative paths. Mark Ibold’s entry for their swan song "The Eternal" also allowed for more of this exploration with Kim Gordon having more room to commit to third guitar. However "The Eternal" also took more cues from Ibold’s bottom-end swing and perhaps dialed back the expansiveness of the "NYC Ghosts and Flowers" and "Sonic Nurse" era a notch in a cool way, making it one of the best group efforts for me, anyway. Perhaps this fueled some of these tracks here, in an already comfortable zone with a new lineup and new drive to take sideroads to even more outer realms.

"In/Out/In" reveals their last decade to be still heavy on the roll-tape and bug-out Sonic Youth. Not all recorded in one session but rather spread out over 2000-2010, the sequencing here is especially well thought out. Opening with the 2008 “Basement Contender” we get a super-unfiltered glimpse of the band at Kim and Thurston’s Northampton house creating a gentle springboard of Venusian choogle, with phased Lee lappings at cascading Thurston figures forming a simmering soundtrack. “Machine” offers another instrumental track from "The Eternal" sessions and is a steamy exercise in stop-start rhythmic grunt amidst a jungle of chiming and upward spiraling chord progressions. We’ve also got the extended score offering “Social Static” from the Chris Habib/Spencer Tunick film of the same name, draping white sheets of noise over your head then descending into a gauzy maw of car-alarm guitars and ambient-yet-disruptive turbulence that eventually subsides into a smoky coda. Two more tracks round out the set both culled from a Three Lobed box set of various artists from 2011 called "Not the Spaces You Know, But Between Them": “In & Out” quietly resembles Can in a cave with dripping stalactites of Kim’s wordless tone rumble and was recorded at a soundcheck in Pomona California and their home Hoboken turf in 2010. “Out & In” from 2000 was done in their late downtown NYC studio and serves to close out this LP’s last 12 minutes as a reminder of what they got up to with O’Rourke there. More gentle time shift chord framework erupts into molten fury three minutes in, before mutating into the sonic equivalent of a slowly collapsing star.

Casting an audio net over the entire instrumental/outtake oeuvre of Sonic Youth’s long history isn’t something easily committed to a single release without a doubt. Hearing these tracks in comparison to, say, 1986’s "Made In USA" material shows the massive leaps they took over the years. Whereas ’86 showed them freshly discovering their go-with-the-flow instrumental abilities for a soundtrack, their last decade showed them complementing the ambience with assured twists and turns that only came to be through their inimitable and rooted telepathy. That, plus the freedom to compose in more comfortable environs other than dank Ludlow Street rental spaces (hard to believe "Daydream Nation" was created in a claustrophobic practice basement) most assuredly was a component in their continued paths of discovery. Shifting on the drop of a dime from quiet/deep forays into full on noised-out Autobahn stomps with Steve Shelley at the wheel, they painted detailed and varied brush strokes and continually created organic sounds that undoubtedly carried the signature sound of the band, while ringing loud with their continual drive to free themselves from just that. Enjoy this capsule.