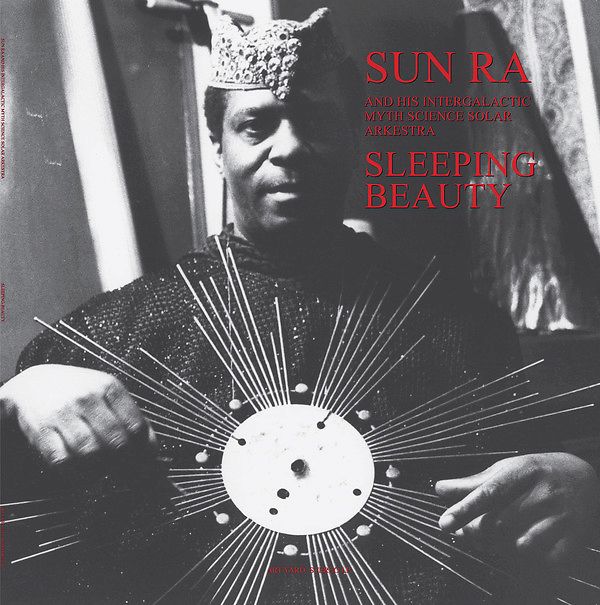 It is a studio recording featuring at least twenty-eight musicians, an enlarged version of the Arkestra which had just crossed the Atlantic to play the 1979 Moers festival. The line up includes both acoustic and electric bass players, electric guitarists, and the reed and brass sections are augmented beyond the core members of the Arkestra.

The recording session which produced Sleeping Beauty also gave us Strange Celestial Road, released on the Rounder label. The two albums have a markedly different feel, in spite of the common date – according to vibraphone player Damon Choice, the differences perhaps partly stem from later post production, and the addition of vocals. All three tracks on Sleeping Beauty have tenor solos by John Gilmore which can count among his finest work. Other musicians’ work is also very worthy of note: Vincent Chancey’s french hom in particular. The overall textures of the arrangements and also the sound of this particular Arkestra, are unique, found on no other Sun Ra album: listen to the opening to “Door Of The Cosmos”, as vocals and keyboards are joined by guitars and bass, and the hom arrangements cut in around Gilmore’s solo. There are many fine such moments throughout the album.

This album features groove-oriented tracks with sublime multi-instrumental complexity, a large ensemble recording, similar to that found on Sun Ra’s Lanquidity and On Jupiter albums. Sleeping Beauty is a high point in Sun Ra’s discography. The electric guitar and bass play a critical role in driving the music, with hypnotic electric piano, organ and vibe lines that flow with gentle restraint and some beautiful sax solos from John Gilmore and Marshall Allen. This album features gospel-like vocals from the wonderful June Tyson and Rhoda Blount helping to establish the spiritual and mystical foundation of Sun Ra’s music – a totally uplifting and joyous listening experience.

More by The Sun Ra Arkestra