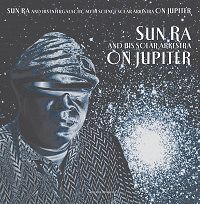 "On Jupiter is near ideal as an introduction to the musical worlds of Sun Ra. It has a magical mix of colours from Sun Ra’s varied palette. Beneath its compelling surface lie many layers of musical detail, and numerous hints as to where Sun Ra was coming from and where he was heading. It combines real depth with beauty and hits you the first time you hear it. On Jupiter represents Sun Ra’s closest encounter with the world of disco. In the late 1970s he made other albums which also gesture in this direction – Lanquidity has a jazzrock feel while remaining firmly part of the Ra omniverse, this is true too of Disco 3000 despite its title. On Jupiter really has only one track which fits the ‘disco’ tag – “UFO” – but this piece is such a strong statement that it becomes the centre of gravity of the album. This has meant that the other tracks here have been somewhat overlooked.

“Seductive Fantasy” is a fine performance, with a rare chance to hear James Jacson’s bassoon in both its opening and closing stages. “Seductive Fantasy” has an ensemble theme stated twice during the performance, featuring John Gilmore, who also offers a very fine tenor solo. Before this there is a fine understated solo by a baritone saxophonist, as well as contributions from Marshall Allen on oboe, electric guitars and bass. There is a cameo for Eloe Omoe’s bass clarinet, and towards the end of the piece unidentified arco string players make an appearance.

There is much excellent Sun Ra piano to be heard throughout the whole of “Seductive Fantasy”. The title track, “On Jupiter”, features Marshall Allen’s oboe and Sun Ra’s piano, along with guitars and bass and multi-layered percussion. This is the first appearance on record of this piece, afterwards to remain a frequently performed item in the Arkestra’s book. “UFO” bursts into life with the full Arkestra in disco mode, and contains solos from John Gilmore, Taylor Richardson and Michael Ray. “UFO” is one of those pieces which Sun Ra seems to have added to the band’s book only for a short time, after which he left it alone. This is its second known appearance, the only others being from a few concerts, all within a few months of each other in mid 1979.

More by The Sun Ra Arkestra