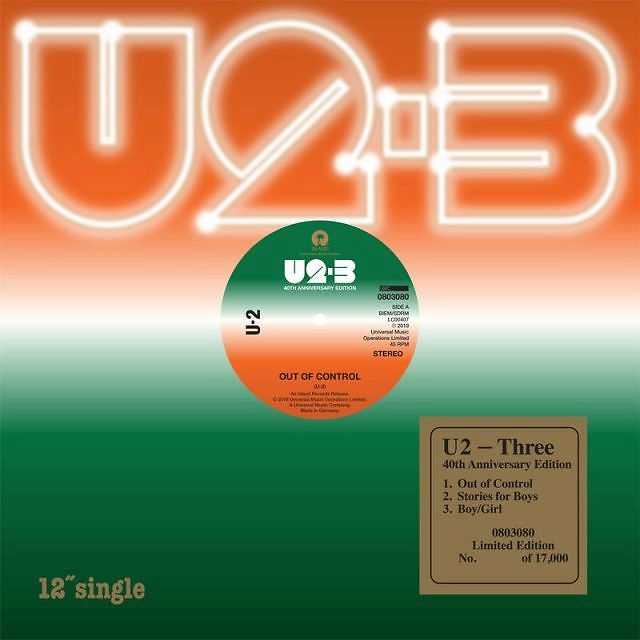 Reissue of U2's debut 12inch release
€ 18,95
Add to wishlist
PICK-UP AT SHOP / FREE SHIPPING FOR ORDERS WITHIN BELGIUM AND EXCEEDING € 100 (FYI: we notice delays at Bpost which are out of our hands, if you want to be a 100% sure about delivery date, best choose pick-up) / Shipping costs are dependent on various factors and are calculated in your shopping cart. Add this item to your cart to see the shipping cost. Or pick up your order at our store in Ghent.

Three was produced as a 12 inch and subsequently a 7 inch, with an initial run of 1,000 individually numbered copies. It has been reissued four times since then, but it remains a hard item to track down and wasn't released on CD until 2008 as part of the bonus disc with the reissue of Boy, U2's first album. The track order was determined by a listener poll on Dave Fanning's radio show. Callers chose "Out of Control" to be the A-side of the record, with "Boy/Girl" and "Stories for Boys" as runners-up, constituting the B-side of the record.

About the 12" version: U2 - Three - First release, 1000 copies made, is numbered with sticker on CBS sleeve. Band members names inscribed on both sides of the vinyl in the dead wax. Ireland spelled correctly on label, "Made in England" on bottom.