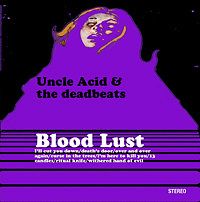 Blood Lust was the band's breakthrough album, with The Quietus describing it as "a glorious and idiosyncratic collection that quickly garnered rabid cult status amongst the worldwide doom fraternity" and Decibel Magazine referring to it as "a groovy, evil delight". Allmusic described Blood Lust as "a mixture of psychedelic rock's harrowing comedown, garage and punk rock's nihilistic ascent, and the earliest manifestations of heavy metal's occult-laced, nerve-damaging bludgeon". The album garnered substantial acclaim, for which K.R. Starrs remarked, "it kind of took everyone by surprise that the album took off the way it did".