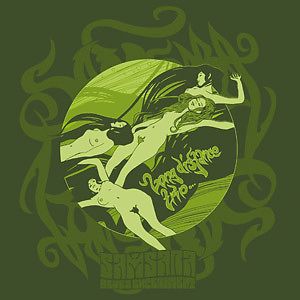 Samsara Blues Experiment is a German band founded in summer 2007 by guitarist Christian Peters after leaving the band Terraplane. The line-up since autumn 2008 includes Hans Eiselt on second guitar, Richard Behrens on bass and Thomas Vedder on drums. All members had been active in different underground bands before. Samsara Blues Experiment plays a mixture between Stoner Rock, Psychedelic Rock and folkloristic influences, especially from Raga.

For the celebration of their 5th anniversary the first 'cult'-album of Berlin's heavy psych monument, Samsara Blues Experiment (SBE), is NOW released as a double album in a new artworked fold-out sleeve; containing the track 'Center Of The Sun' (which was not included on the first vinyl edition due to excessive length).