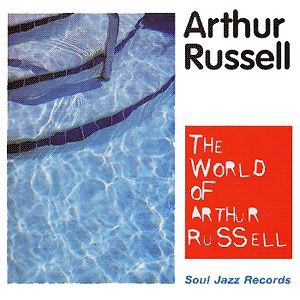 “One of the great songwriters of the 20th Century. Russell is the great enigma of the New York scene.” THE WIRE

Since the initial groundbreaking release of ‘The World of Arthur Russell’, Russell has become the subject of intense media interest. With the recent release of a film about his life (‘A Portrait of Arthur Russell’), as well as new albums of unreleased recordings, Arthur Russell’s stature as a great artist has grown to is current height. (“One of the great songwriters of the 2oth Century” The Wire).

Arthur Russell holds a unique place in the history of dance music. As an artist he had the admiration of everyone from Philip Glass to Todd Terry. As well as his solo work he also formed the seminal groups Dinosaur L and Loose Joints in the 1980s. With tracks such as "Go Bang" and "Is It All Over My Face?", Russell redefined Dance music in the 1980s as both an intelligent and subversive form.

At the centre of the New York Dance scene in the 1980s, Russell was co-founder of Sleeping Bag Records along with Will Socolov. As well as releasing Russell’s own material, Sleeping Bag would release seminal music from Mantronix, Larry Levan, Patrick Adams, EPMD, Joyce Sims and Todd Terry amongst others.

As a regular visitor at David Mancuso’s " Loft", and Nicky Siano’s "Gallery" nightclubs and even Studio 54, Russell immersed himself in the New York Dance scene whilst continuing to create avant-garde experimental music. These two elements in his life and music make him truly unique. Larry Levan, Walter Gibbons and Francois Kervorkian all played pivotal roles as remixers of Russell’s work and feature on many of the tracks featured here.

Arthur Russell died in 1992 leaving behind an enormous body of work. This release features both the classic tracks of Arthur Russell such as "Go Bang", "Is It All Over My Face", "Wax The Van" etc alongside impossible-to-find collectors tracks such as " In The Light Of The Miracle" and the private-pressing only "Pop Your Funk".

This is the first collected work of Arthur Russell who has been for many years one of the most respected iconic artists in the history of dance music. This album comes with detailed sleevenotes discussing Arthur Russell’s life and there is also a limited edition super-loud triple-vinyl LP edition.