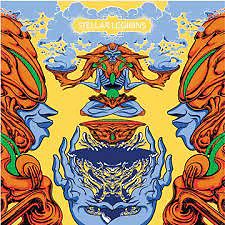 Stellar Legions is four experienced space cadets from the Antwerp interstellar legion, led by Captain Andrew Claes (STUFF., BRZZVLL, Internal Sun). With a sound rooted in jazz, improv, hip-hop, dub and electronic music, brace yourself for an intergalactic trip through colourful musical worlds and allow yourself to be carried away to indefinable, otherworldly but always hospitable beacons.

Alongside Claes, the delegates on duty are all heroes from the Allied star: Bram Weijters (Raymond Van Het Groenewoud, Crazy Men), Klaas De Somer (Tourist Lemc, Selah Sue) and Fre Madou (ex-DAAU, Namid). With them, come stories and artifacts from the multidimensional cosmos to our beloved mother planet Earth and this autumn, they passionately present their first omnibus 'Stellar Legions', released 21st October via the groove-obssessed Sdban Ultra label.

The album consists of eight tracks recorded in the studio and live, resulting in one big cosmic experience that exhilarates down to every last arrangement. From Claes' twisted sax on the semi-electronic ecstatic dream world that is an 'An Arp in Tunisia' to the jazzy snatches of 'Wessel' where De Somer's hurried drum patterns and Weijters frenzied keyboard solos catch light, Stellar Legions unites the adventure and improvisation of jazz with contemporary sounds.

At the core of the Stellar Legions sound is a rhythm section Sly & Robbie would have approved of: loose and sticky, grinding and unwinding: De Somer's drums fizz with expectation while the relentless bass strokes from Madou provide the beating pulse. It's fresh, it's raw and it keeps us listening, grooving and wanting more. Elsewhere, 'Odyssey' is a cataclysmic mix of feverish sounds and melodies that take you to an extra-terrestrial place, while the live recording of 'Alcyone', basks in a spatial mix of futuristic grooves and ethereal soundscapes before album closer 'Covix', results in a spacious and wonderfully atmospheric affair.

Claes is also a teacher of 'Live Electronics' at the Conservatory of Antwerp and a doctorate in the arts, where he is currently investigating the possibilities of an electro-acoustic saxophone. He also regularly gives workshops on the Belgian synthesizer microcontroller platform, Axoloti. His latest achievement is AI-driven robot-jazz project 'BotBop' with Dago Sondervan and Kasper Jordaens, which explores the possibilities and limits of 'computer aided music performance'. Their latest project 'Integers & Strings' premiered at the Sònar festival in Barcelona in November 2021.

A2. An Arp in Tunisia