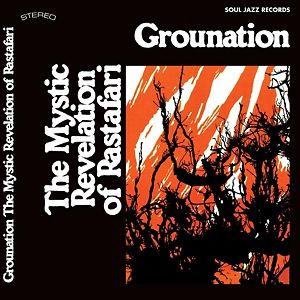 Groundbreaking 1972 album! An absolute and essential classic of Reggae music!
€ 69,95

Like Sun Ra's Arkestra and John Coltrane are to jazz, the Mystic Revelation of Rastafari are to reggae - the ultimate expression of roots music and Rastafarian ideology in reggae music, music functioning at a high level of spiritual consciousness combined with an equally avant-garde and forward-looking approach to sound.

The group's stunning, unique and groundbreaking 1972 album ‘Grounation’, a mighty conceptual triple-album (the first ever reggae triple!) is, similar to Marvin Gaye's 'What's Goin' On', a definitive all-encompassing cultural statement of its time and place. A sprawling album of raw and unique cultural expression that combined Rastafari consciousness with deep spiritual jazz music - an absolute and essential classic of Reggae music.

The Mystic Revelation of Rastafari group came into existence at the start of 1970s, the union of two artists of equal repute – Count Ossie and his African Drums and saxophonist Cedric ‘Im’ Brooks’ and his group, The Mystics. Both Ossie and Brooks were alumni from the great Studio One Records.

The Mystic Revelation of Rastafari’s ‘Grounation’ is a massive opus, a work of profound musical genius that tells the story of Jamaica through music and words. The album is a cornerstone in the history of reggae, a unique and other-worldly album the like of which has never been made since.

More by The Mystic Revelation Of Rastafari