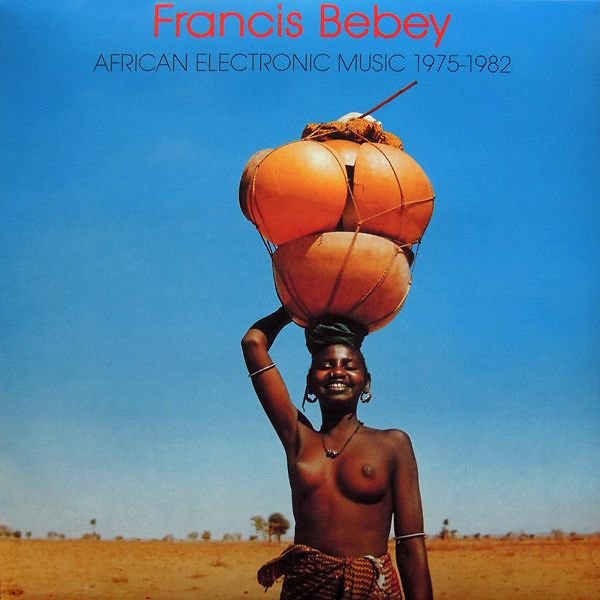 Francis Bebey is not exactly a household name. However, he was one of the last true "Renaissance men", something of a Franco-African Leonard Cohen, if you will. Born in Cameroon and educated at the Sorbonne and in the United States, Bebey was a successful novelist, journalist, sculptor and diplomatic consultant.

He also made music, releasing scores of albums from 1969 onward, mostly in a singularly eclectic, acoustic guitar-based mixture of African and Western styles. But, as its title suggests, African Electronic Music 1975-1982 highlights a lesser-known aspect of Bebey's career in music. Inspired by his father's electronic organ, Bebey experimented with its sounds and pre-programmed drum patterns, releasing several rare, electronics-based albums. African Electronic Music 1975-1982 collects 14 tracks from these releases. It is, not surprisingly given Bebey's history, an eclectic mix nonetheless.

Crucially, the music here is not all electronic. Bebey used the electronic instruments to intermingle experimental techniques and new textures with traditional acoustic guitar, bass and African percussion. This amalgam plays out in exemplary fashion on opener "New Track". Chiming, gamelan-like percussion gives way to a huge synthesizer riff that sounds like a hoarse, highly-processed wah-wah guitar. Electric bass holds down the bottom as Bebey chants, "I wanna banana and water / And dance on the new track". In its heavily-syncopated strangeness it's all very reminiscent of fellow Afrobeat pioneer Fela Kuti, though with a one-man-band taking place of Kuti's Africa 70.

You might well figure you know exactly what you're in for, then, but African Electronic Music 1975-1982 takes several twists and turns. "La Condition Masculine" heads up a suite of tracks that are made up of Bebey orating in French as a hissing drum machine and squiggly synths do their polyrhythmic thing in the background. Of these, "Divorce Pygmee" gets a nice, laid-back groove going, while "Fleur Tropicale" is based on acoustic guitar. "Tiers Monde" and the wonderfully-titled "Coffee Cola Song" are bright folk-pop that must have at some point passed through Cornershop's turntable.

Then there are the real curiosities. "Pygmy Love Song" is a brooding, organ-led, English-language ballad that sounds like David Bowie or even Cohen himself. The only giveaway is the crude pan flute synth that punctures the track. "Catching Up" is Bebey on the edge, a hard-funk Afrobeat rhythm over which Bebey denounces an "impossible love" before moaning and hissing "Cheer up!" in a manner that is anything but encouraging. Fascinating.

The remaining tracks are mostly jams and freakouts, instrumental meanderings more than proper compositions. These are reminders that African Electronic Music 1975-1982 is, after all, a bit of a hodgepodge compilation, and that Bebey was indulging his creative spirit more than he was creating music for a mass audience. Still, the more structured tracks serve notice Bebey was an accomplished composer who had several big hits in his native land.

Electronic music technology developed swiftly over the time span covered by this compilation, but Bebey's does not seem to have kept up. The rudimentary drum machines, organs, and synthesizers that sounded groundbreaking in 1975 had become outdated by 1982. What's really impressive and timeless is the loose, independent spirit that permeates this music.