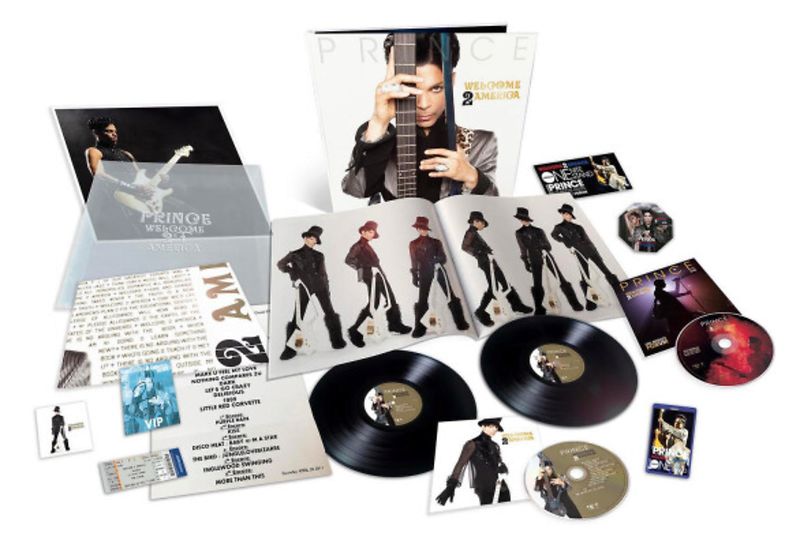 The Deluxe Edition of Welcome 2 America combines the 2LP and CD versions of the album with a never before released Blu-Ray of Prince’s full April 28, 2011 performance at the Forum, part of the Welcome 2 America Tour’s historic 21 Nite Stand in Los Angeles. The show is presented in stereo, 5.1 surround and Dolby Atmos, and includes 24 tracks from across Prince’s career, from his biggest hits to fan favorites to ten rare covers. In addition, the deluxe edition features a 32 page 12x12 book, exclusive poster and an embossed vellum envelope of limited edition memorabilia all housed in a luxe, gold embossed package. Experienced as a complete package, the Deluxe Edition provides an immersive view of Prince’s creative genius during his spontaneous, energetic, and thought-provoking Welcome 2 America era.

Welcome 2 America has been announced for release in July 2021. It is the first full previously-unreleased studio album of Prince material to be released posthumously, and the tenth posthumous album release overall. Recorded in 2010, the album was tentatively planned for release in 2011, likely as a follow-up to 20Ten and in conjunction with the Welcome 2 America Tour, which ran from December 2010 to May 2011. The album was abandoned at the time for unknown reasons, however. The album as announced for release in July 2021 makes use of what's believed to be the final configuration of the album.

The tracks tentatively planned for inclusion on the album were thought to be recorded in 2010 and early 2011, although specific recording dates are not known, and the official press release states that the album was recorded in "Spring 2010." Hot Summer and Stand Up And B Strong are known to have been recorded in Spring 2010 (before the release of the 20Ten album), and may have been the earliest tracks recorded for this album, but this is unconfirmed. Morris Hayes co-produced the album with Prince (as "Mr. Hayes").

Black Muse and Cause And Effect are two more tracks assumed to have been recorded around the same time but it’s unclear if they were at any point slated for inclusion on the album.

Drummer Chris Coleman and bass guitarist Tal Wilkenfeld make their only appearances on a Prince album, on Welcome 2 America, Hot Summer, and potentially on other tracks to be confirmed. While musical credits are not known for many of the album’s tracks (specifically Born 2 Die, Check The Record, Running Game (Son Of A Slave Master), Stand Up And B Strong and Welcome 2 America), it is clear that the album contained more contributions from others than its predecessor, 20Ten. Background singers including Shelby J., Liv Warfield and Elisa Dease, who had been present throughout 20Ten, appeared on Same Page Different Book and Welcome 2 America, with Shelby J. providing a rap on the former track. Elisa Dease also provides co-lead vocals on Stand Up And B Strong. Andy Allo appears on background vocals on the Hitnrun Phase Two release of 1,000 Light Years From Here, but since she joined Prince’s band in May 2011, it’s possible that her vocals on that version will not be included here.