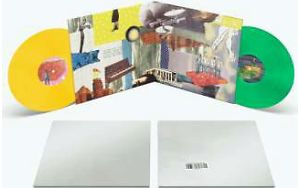 The Kings of Belgian post-rock! Produced by the Baron of techno Dave Clarke!
€ 34,95

De portables called their new album de portables. When a band releases a "self-titled album," it's usually not out of lack of inspiration, but to say, "This is who we are." Usually it’s a debut. Starting with a bang. Not so with de portables. The band has waited twenty-five years and ten albums to drop that album title. But their statement is indeed: this is what de portables stand for.

After the critically acclaimed double album The Killing Horizon from 2016, it was time to explore new roads. No fixed destination. But there was a new “travel attitude”. And with electronica wizzard Kasper Jordaens also a brand new travel companion. How to describe that travel attitude? As an aspiration to capture the Moment. The moment when everyone is in the same sweet spot. When all brains synchronize, and all hearts beat to the same rhythm. When the magic happens. Fairly ambitious. And maybe this album was only possible after twenty-five years of playing and listening together. In 2022, de portables have reached a point where they know each other so well that they can let go of everything and disembark in blind faith for the most adventurous trips.

And that is exactly what de portables – the album – has become: four LP-side long explorations. Four recordings – or snapshots if you like – of groove-driven adventures. Hypnotic excursions in which the five portables take turns in taking the lead, but in the first place grant each other oceans of time and space. And so this album, and the quest for it, became not only an exercise in letting go, but also in omitting. In consciously seeking out the emptiness and tranquility.

Those same keywords “traveling”, “omitting”, “snapshot”… also inspired the artwork. The minimal, silver-coloured exterior is a reflective nod to the twenty-fifth anniversary of de portables. But also to “that other self-titled double album with a monochrome cover”. The gatefold in turn opens up like a holiday snapshot, taken during one of the musical treks.

What de portables eventually let go as well for the first time after twenty-five years: the mixing of their album. Although they didn't hand it over to just someone, but to the Baron of Techno himself: British DJ Dave Clarke. Even for those who follow the portables closely, this collaboration may come as a big surprise. But Clarke has been charmed by the band for many years. The result of this collaboration in one word? Sparks.

A1 See You Later Arpeggiator

B2 Johnny And Marimba