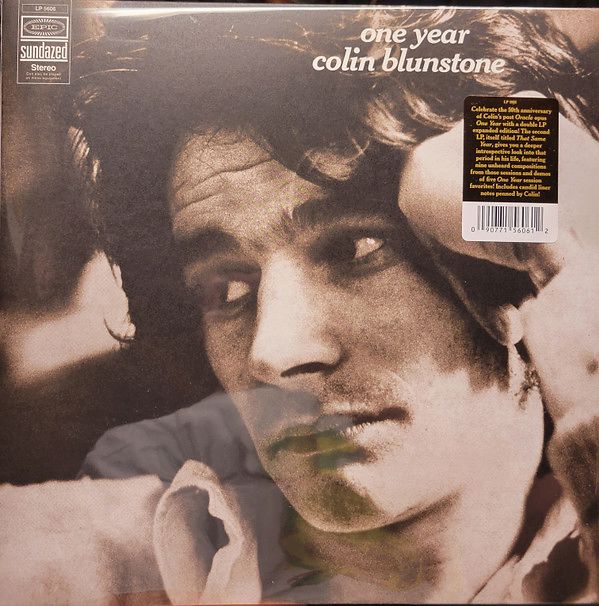 Colin Blunstone and Sundazed Music celebrate the 50th anniversary of Colin’s post Oracle opus One Year with an expanded edition! The second half, itself titled That Same Year, gives you a deeper introspective look into that time in his life. The album largely features Colin singing accompanied solely by his acoustic guitar.

That Same Year includes beautifully sparse demo versions of three songs from One Year including “Caroline Goodbye” and “Let Me Come Closer To You” where Colin is joined by fellow Zombie Rod Argent on piano. Four songs have Colin joined by the late English singer-songwriter Duncan Browne on classical guitar. Beyond the three familiar songs you will find Colin’s familiar voice and wit come through on eleven completely unheard compositions all penned for the One Year album; including “Sing Your Own Song” where he sings of reading about his own death in Rolling Stone.

One Year is an album that somehow manages to be both lush and sparse at the same time and always deeply intimate. That Same Year finds a way to bring your listening experience to a deeper level of intimacy.

In addition to penning most of the album, Colin also penned the liner notes that fill the gatefold jacket along with unseen photos from that year. The notes go track by track through One Year along with some background on That Same Year.

"Fifty years on, there’s a dream like quality to my memories of One Year. Almost seeming like another lifetime, a time of innocence and naivety and a time when anything seemed possible. Chance and circumstance had brought Rod Argent, Chris White and myself together again for the first time since we'd played in The Zombies. This time Rod and Chris would be producing me as a solo artist, a step into the unknown, a moment of truth, a turning point in our lives. The first tracks were recorded at sound technique studios in Chelsea but we quickly moved on to the more familiar setting of Studio 3 in Abbey Road where we had previously recorded Odyssey And Oracle and where we were once again guided through the recording process by the brilliant engineer Peter Vince.

Shortly after we had relocated to Abbey Road we had a moment of epiphany when we were introduced to the stunningly beautiful string arrangements of Chris gunning as they went on to be the musical backbone of this project taking it to places rarely approached in contemporary music and giving it its own unique appeal.

………...and now all the principle performers are assembled and as the  music plays I start to drift and so many of the ghosts who hide inside the secrets of this album suddenly come alive and yesterday becomes today, again!"