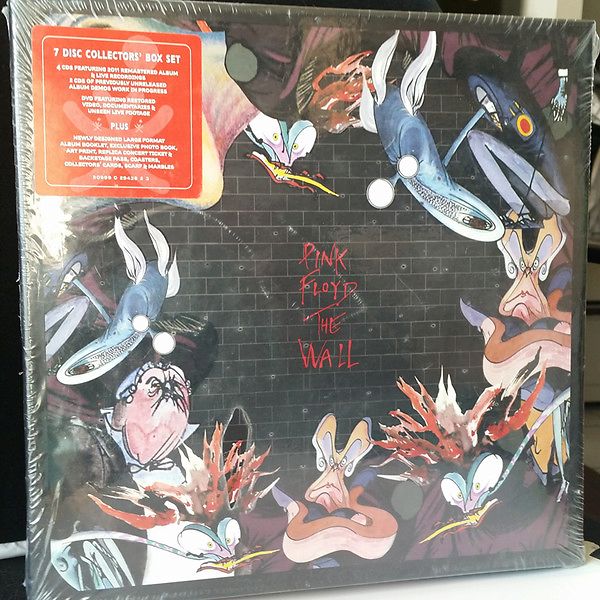 * an exclusive 27 cm x 27 cm Gerald Scarfe Art Print "The Wall - The Wife", • 4 x "Immersion Collectors' Cards" 8 cm x 11 cm featuring art by Storm Thorgerson and excerpt from lyrics with a total of 57 different variations (The Collectors' Cards are a set of obscure Floyd images reminiscent of cigarette cards [but these are anti-cigarette]. They can be found in various Pink Floyd products) • a replica of The Wall tour ticket from 14. February '81, Dortmund, Westfalenhalle 7,5 cm x 16,5 cm and • a replica of The Wall backstage pass, Nassau, Coliseum, February 26, 1980, 9 cm x 9 cm,

* new Gerald Scarfe handwritten lyric poster All discs come in separate cardboard sleeves, 4 of these can be mounted in the box set No exact durations given for all discs

The Wall is the eleventh studio album by Pink Floyd. It was released as a double album on 30 November 1979, by Harvest Records in the United Kingdom and by Columbia Records in the United States. It received an initially mixed critical response, but was commercially successful, reaching number 3 on the UK Albums Chart, and topping the US Billboard 200 chart for 15 weeks. The album is considered one of the most recognisable concept albums. It is the band's second best selling album (after The Dark Side of the Moon) and one of the best selling albums of all time. In 1982, it was adapted into a feature film of the same name.

Bass guitarist and songwriter Roger Waters conceived the album as a rock opera during Pink Floyd's 1977 In the Flesh Tour, when his frustration with the audience became so acute that he spat on them. Its story, which follows themes of abandonment and personal isolation, explores Pink, a character whom Waters modeled after himself and the band's original leader Syd Barrett. Pink's life begins with the loss of his father during the Second World War, and continues with abuse from his schoolteachers, an overprotective mother, and the breakdown of his marriage; all contribute to his eventual self-imposed isolation from society, represented by a metaphorical wall. The band, who were then struggling with personal and financial difficulties, supported the idea. Waters enlisted an outside collaborator, Canadian producer Bob Ezrin, due to his need for somebody who he felt was "musically and intellectually" similar to himself, as well as a helping hand for the cumbersome amount of material that was written. Recording lasted from December 1978 to November 1979, with stops in France, England, New York, and Los Angeles. Waters' song "Another Brick in the Wall, Part 2" became the band's first and only chart-topper when released as the album's lead single. Two songs co-written by guitarist David Gilmour, "Run Like Hell" and "Comfortably Numb", were also issued as singles.

The Wall was the last studio album released with the 11-year-spanning line-up of Waters, Gilmour, keyboardist Rick Wright, and drummer Nick Mason. Wright was fired from the band by Waters during its production, but stayed as a salaried musician, performing with Pink Floyd on their subsequent live tour. The live performances, which were later released as a live album, featured elaborate theatrical effects. Some of the album's themes would be continued in the band's next album, The Final Cut (1983), which contained some outtakes from The Wall. By 1999, the album had sold over 23 million RIAA-certified units (11.5 million albums), making it the third-highest certified album in the US. In 2003, Rolling Stone placed The Wall at number 87 on its list of "The 500 Greatest Albums of All Time".