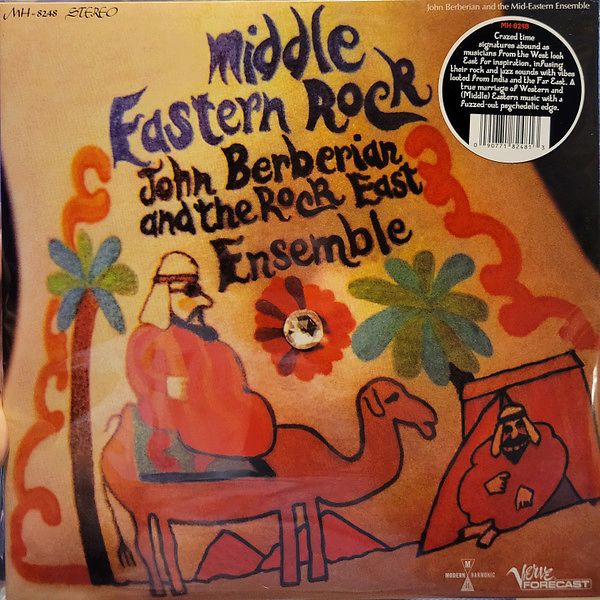 A true marriage of Western and (Middle) Eastern music with a fuzzed-out psychedelic edge.
€ 30,95

Crazed time signatures abound as musicians from the West look East for inspiration, infusing their rock and jazz sounds with vibes looted from India and the Far East. A true marriage of Western and (Middle) Eastern music with a fuzzed-out psychedelic edge.

Released originally in 1969, Middle Eastern Rock is a unique, compelling fusion record from Armenian-American oud player John Berberian. The Rock East Ensemble, Berberian’s backing band, consists of the artist’s standard group, which specializes in traditional Armenian music with a jazz edge, and American session musicians who bring more of a rock sound. The results, which blend elements of psychedelia, free jazz, surf music, and various klezmer, African, and Middle Eastern textures, are dazzling, and are sure to thrill anyone with a taste for rare "outside" albums.

The concept came from my producers at Verve at the time. I was really excited — it was a great transition. The title was a bit misleading — it was more jazz than rock — but we incorporated two or three rock musicians, including Joe Beck on guitar, who just wailed away with the oud. I think for its day it was a very progressive album and is thought of as remaining very current. I used Middle Eastern melodies, some of which I arranged myself, and we went over them with three rock musicians and four Armenian musicians. We came together one day and made an album. The entire LP was rehearsed and recorded in one day!

It was very well received, but its success was short-lived because a few months after it came out the management at Verve changed hands, and they weren’t interested in pushing the material that had already come out. I think it would have been much bigger had the company stayed intact.