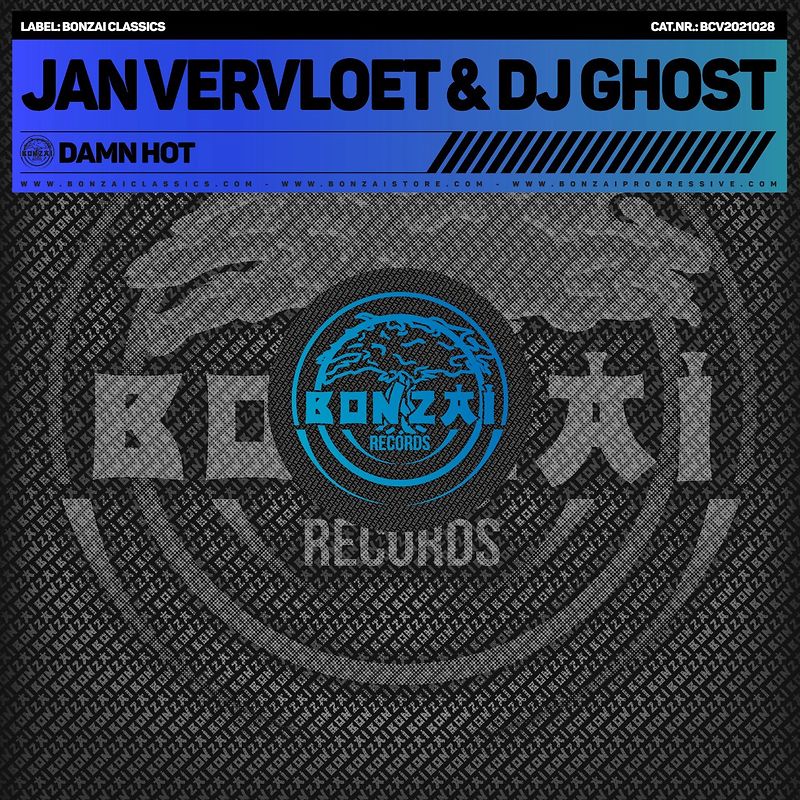 Jan Vervloet and DJ Ghost head up our next vinyl release with the sexy, Techno fuelled Damn Hot, which is joined by the previously unreleased and first time on vinyl, Super Dry. Jan is a well-known name on the Belgian music scene and really needs no introduction. As a producer he has released more than 150 tracks worldwide including a gold record with Fiocco in Belgium and a number 1 hit in Holland with Scoop. Jan has been a part of so many groups and with lots of his own productions he has appeared on countless compilation albums and has featured on most of Bonzai's own compiled series. He recently delivered a blistering remake of Here’s Johnny alongside DJ Liberty, championing the nu rave era in style. DJ Ghost aka Bjorn Wendelen is another extremely popular Belgian artist with a career spanning decades. He has been the driving force behind several very successful projects such as Armani & Ghost and many others and he’s a longstanding associate of the mighty Bonzai parties and studios, having produced many tracks under the Bonzai imprint alongside the crème-de-la-crème of Europe’s artists.

Damn Hot comes in two flavours, on the A side we have a rip-roaring dancefloor destroyer, filled with pounding beats, industrialised synths and razor-sharp percussions. The track builds and builds to the break, where a wall of sound rises to a frenzied climax with a mighty drop. The Old Skool Mix takes us right back to the good old days of hard edged, pumping rave. Monstrous kicks get things moving as rhythmic percussions are let loose. Classic rave-style stabs and hoover synths form the backbone of the track and are joined by cool vocal shots. The break descends to almost subtle tones before that raucous synth line returns, leading us to another massive drop. Two outstanding cuts that will destroy any floor. Concluding the release, we have Super Dry, which gets a cut to wax after a successful digital release. Getting the pulses racing right from the get go, feisty kick drums and spritely percussions set the tempo. The famous Ironside siren hook grabs attention as huge rave stabs greets us on the main groove. A proper stomping, high-tempo techno pumper that will not disappoint.