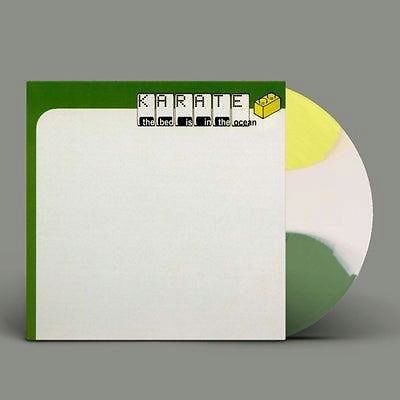 Release postponed until June 17th. We'll fulfill your orders as soon as possible...

A lingering guitar note. A cushion of a bassline nudging along a hushed cadence unspooling impressionistic poeticism one halting line at a time; the sparse snap of a snare providing punctuation. This is how Boston’s Karate opened their third full-length, 1998’s The Bed Is In The Ocean. Perhaps this was a reaction to the aggressive punk tones that marked their previous album, or maybe they hoped to capture the somnambulant dusk on one of those pristine fall days that make living in a town whose population swells when colleges welcome back students all worthwhile. Then again, Karate never made a point of chasing the same idea twice, and “There Are Ghosts” remains in line with the band’s stylistic intrepidness and unpredictability. Even the group’s lineup appeared constantly in flux. After expanding from a trio to a quartet and employing a dual-guitar attack with 1997’s In Place of Real Insight, founding member Eamonn Vitt hung up his axe to attend medical school. Karate soldiered on as a trio, with mid-stream addition Jeff Goddard’s bass work helping establish a sidewinding path forward through the smoky jazz melodicism and sun-beaten blues brushstrokes that hung in the background of the band’s catalog.

In their short time together, Karate helped bolster the national punk ecosystem, a scene in which individual artistic vision was prized but rarely achieved. Their exacting precision and emotive interplay helped recombine the DNA of the dignified grace of slowcore, the hot-and-sweaty atmospherics of the blues, and the high-wire tension of post-hardcore to deliver drawling instrumental curveballs and a furtive riptide climax with a controlled grace on “Outside Is The Drama.” Singer-guitarist Geoff Farina frequently teased out the emotional nuances of each song, his worn-in voice shading in the complexities of his enigmatic lyrics; no matter how difficult it may be to parse his snatched-from-daily-life wisdoms, on The Bed Is In The Ocean Farina sounded like a guy who knew exactly the right thing to tell whoever may be listening. And with Karate’s snaking turns through quasi-punk reveries no one else appeared capable of mustering, it’s comforting to hear it accomplished by a band that knew exactly what they were doing.