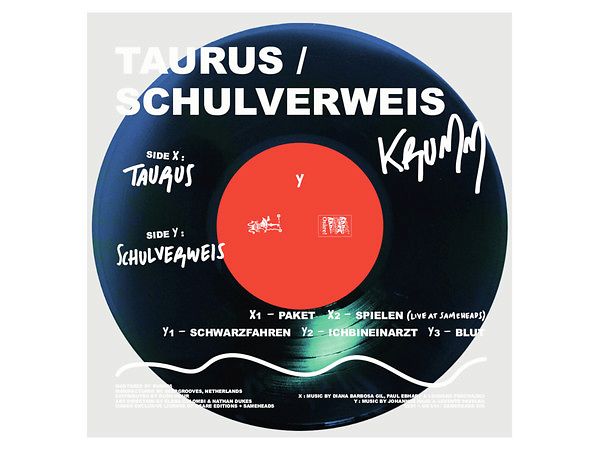 Amsterdam's Osàre! Editions and Berlin's Sameheads team up to present a spicy spilt-side release. A hot take on new wave-saturated punk, the record flirts with the raw sound of the underground, spiralling through free-wheeling experimentation and raucous evenings, powered by throbbing revelry.

First up, three-piece assemblage Taurus crank up an electrified automaton for 'Paket.' With a voice like a supermarket tannoy from a half-forgotten fever dream, Diana Barbosa Gil reels through the days of the week, accompanied by a minimalist, plodding melody. Exploring ideas of self-determination and authority, the band combines spoken-word surreality and in-your-face dance zeal. 'Spielen' captures their palpable chemistry on-stage – the track was recorded live during Sameheads event series Diapason, curated by residents Eva Geist and Ondula.

Turning over to the B-side, upping the ante and the tempo, Schulverweis follow in the footsteps of the Geniale Dilletanten tradition. Art-haus proclivities bounce along to an ear-worm beat in 'Schwarzfahren,' followed up by the bass-whistling wizardry of 'Ichbineinarzt.' Before going out with a bang, howl and a whimper via the aptly titled 'Blut.' Schulverweis' slick delivery is entirely instinctual, improvised in jam sessions over hypnotic loops produced using a children's Casio keyboard, discovered years ago in the dusty corner of a club.

The EP is a testament to the long-standing collaboration between the dual imprints, with Osàre! label boss Elena Colombi appearing frequently on Sameheads lineups. The pair are further united by their shared passion for explosive new talent and all things a little unconventional.