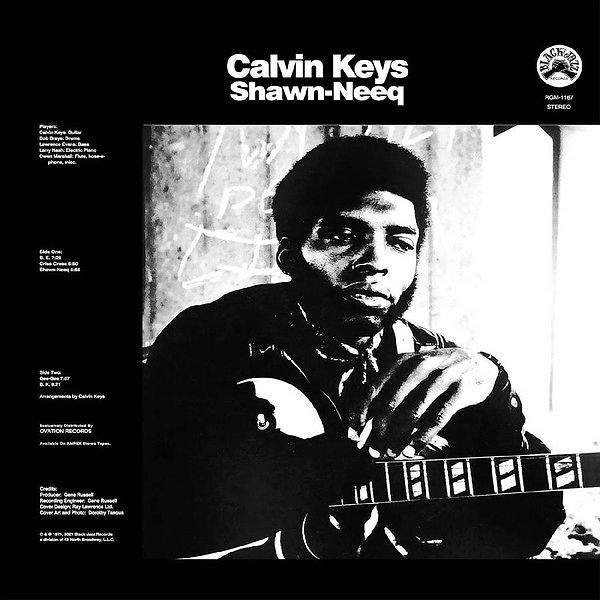 California pianist Gene Russell founded the Black Jazz imprint, and began releasing albums by folks like Doug Carn and Walter Bishop Jr. in 1971. The label only would last until 1975, but during its run, Russell was able to offer an in-the-moment sketch of what was happening in the soul-jazz universe.

Guitarist Calvin Keys—who released his leader debut on Black Jazz the year the imprint was founded—would go on to tour and record with Ahmad Jamal, and solidify his spot as a ranking elder in the Bay Area jazz scene. But on the reissue of Shawn-Neeq, the composer and bandleader seems so effortlessly at home in his quartet (occasionally augmented by flutist Owen Marshall), it’s a bit surprising that he never became a more visible national figure.

Keys’ debut opens with “B.E.,” a 4/4 workout that’s suited more to the dancefloor than the confines of a traditional jazz club; the following “Criss Cross” and the closer, “B. K.,” reaffirm the vibe. The guts of Keys’ album, though, have a different feel. The title track is a contemplative, slowly paced piece leavened by Marshall’s contributions. The flutist also ranks as the main voice on “Gee Gee,” where the tempo picks up a bit, retaining the spirited flow of the era’s best electric work.

The guitarist’s second and final Black Jazz release, the 1974 album Proceed With Caution!, would feature luminaries like percussionist Leon “Ndugu” Chancler and pianist Kirk Lightsey. But this is where it started, making Shawn-Neeq a notable historic marker, as well as a sonically engaging, if all-too-short, run through the era’s soul-jazz territory.