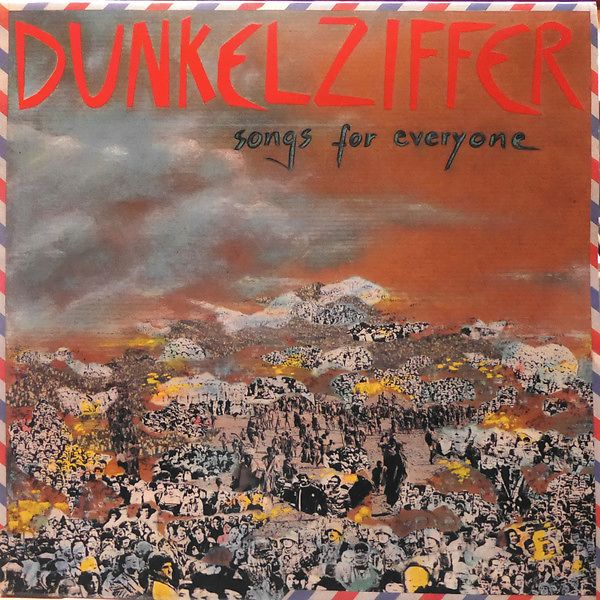 Displaced from their spiritual home (the Stollwerck complex had been levelled in 1987) and robbed of the collaborative exchange it facilitated, Dunkelziffer took a different tack on Songs For Everyone, slimming down to a sextet with a newly streamlined sound. Olek Gelba and Reiner Linke remained in the percussive pocket, laying the foundation for Von Senger and Schubert's melodic prowess, with newcomers Jorge Guarin Quintaro and Irene Lorenz breathing fresh air into keys and vocals respectively.

The reduced line-up may have diminished the chaotic brilliance of their earlier work, but the sparing palette allowed room for each member to shine brighter than ever before. Most notably, Dominik Von Senger, often restricted to rhythm guitar in the past, populated the newfound space with a bounty of rhapsodic solos. Stylistically, the Jamaican riddims, gnarly new wave and Eastern tonality of previous albums were supplanted by the smoothest jazz imbued with Latin flavors and a Mediterranean mindset.

Arriving amid a ripple of taut timbales and spritely trumpet, opener "Songs For Everyone" sounds like it's been playing somewhere forever, just waiting for its moment of discovery. The rounded sound of guest Xavier Padilla's double bass dominates the bottom end, a familiar anchor as the mariachi keys and incendiary guitar try to spirit us away. Light-footed and heavily syncopated, "See It" sashays along the shoreline, inviting you to dance wherever blue seas kiss white sand. Each instrument is crisp, clear and accomplished, while Lorenz voice swells from a sultry whisper into a rich rasping fullness. Optimistic and melancholic in equal measure, "Illuminate" closes the A-side with a triumph of pure pop sincerity.

The smooth jazz sophistication continues on the B-side with "Friends", a gorgeous Balearic torch song for a rose that's never been kissed. Echoes of "Lucky Star" and reverb-soaked drums cascade through a DX7 dreamscape as the plangent woodwind plays an elegy for summer fling. On "Spell It" the cowbells, congas, timbales and toms of Gelba, Linke and sessionist Daniel Basanta form an intricate rhythmic tapestry, transformed into a hip-flexing mambo by the addition of Guarin Quintaro's piano. Dunkelziffer close the LP with Jamaican flavor, though "Inside" is a much more atmospheric creature than the sun-kissed skanks of their previous releases. Largely stripped back to a core of dubby bass, sparse rhythm and subdued piano, this evocative swan-song splits the difference between Compass Point and the Wild Bunch, its muted vocals and distorted guitar anticipating the trip hoppers who would soundtrack the decade to come.