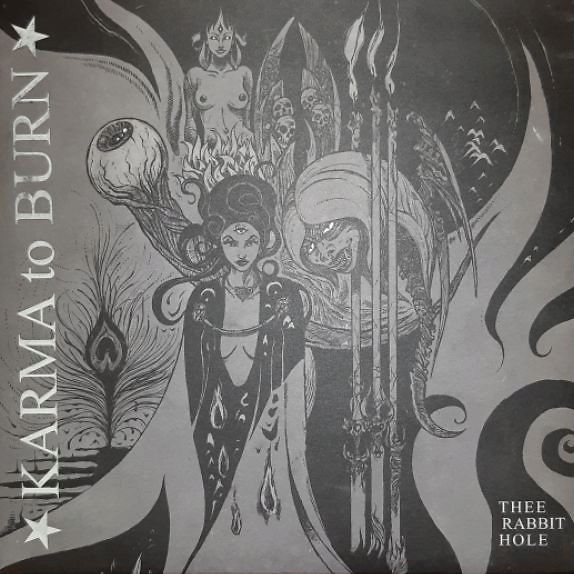 Karma To Burn was founded in 1993 and they produced raw instrumental stoner rock without any singers or lyrics. For the first (self-titled) album, however, a singer was hired under pressure from the record company Roadrunner Records. 'Karma To Burn' was released in 1997. Shortly thereafter, the band separated from singer Jason Jarosz, who could be heard on the album. But in 1994 Karma To Burn recorded songs with singer Jim Davison. The three tracks that were recorded in Kentucky had long been a mystery whether they even existed. After 27 years in the vault of guitarist Will Mecum, they are finally published in full on the B-side of the album 'Thee Rabbit Hole'. In 1993 Karma to Burn recorded their first demo recordings in West Virginia as well as the Kentucky recordings in 1994 with the original line-up Mecum, Limbaugh, Mullins. The 4 tracks of the demo, which were released as demo tape in 1995, can now also be heard for the first time on vinyl on the album 'Thee Rabbit Hole'. The entire demo recordings from the early days of Karma To Burn have been remastered by John McBain (former guitarist of Monster Magnet). The house and yard graphic designer from Karma To Burn, Alexander von Wieding, is responsible for the artwork and has raised the old demo artwork from 1993 to a modern, new level.

More by Karma To Burn