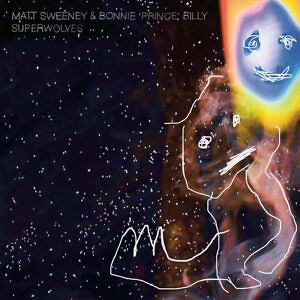 Return to form for Matt Sweeney and Bonnie 'Prince' Billy
€ 26,95

Superwolf is the kind of album that generates its own legend, that become a personal fixation for a dedicated few. It’s the kind of album that discourages the idea of a follow-up. And yet Superwolves, the second album from Matt Sweeney and Bonnie ‘Prince’ Billy, is every bit the equal of its predecessor. It’s got the same astral feeling of discovery, the same sense of rapturous melody, and the same loose and spectral quality.

Once again, Will Oldham wrote the lyrics, and then he sent them to Matt Sweeney to render as music. The two artists have been working on Superwolves, on and off, for nearly five years, though they finished the album at a sprint during the pandemic. Together, they’ve pierced their way into the same instinctive interplay that had preserved so beautifully on their first album together.