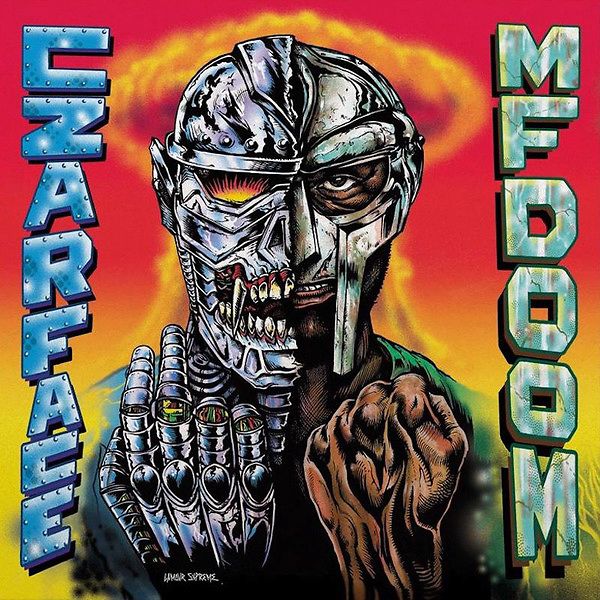 Rising from the wreckage of a war torn planet, Czarface joins forces with MF DOOM in the epic Czarface Meets Metal Face! Blending DOOM's trademark abstractions and CZARFACE's in-your-face lyrical attack, this album is ripe with cartoon violence, societal observations and pop culture musings. Over banging beats provided by The Czar-Keys, the armored team give you the witty unpredictable treats any hip-hop fan can sink their fangs into.

Expect beats, rhymes, and metal as Czarface controlled by WU-TANG CLAN powerhouse Inspectah Deck and 7L & Esoteric team up with everyone's favorite villain, MF DOOM. With track titles like "Nautical Depth","Meddle With Metal", "Astral Traveling" to "Madness of Badness" this album packs a punch with 16 brand new tracks. Add that with features from Open Mike Eagle and Jedi Mind Tricks' Vinnie Paz, we promise you mind-bending metaphors and brain-melting beats as this powerful pairing sounds off in March 2018!

Tracklist
A1. Take Your Medicine
A2. Meddle With Metal
A3. Badness Of Madness
A4. Close Talker
A5. Forever People
A6. Captain Crunch
A7. Don't Spoil It
A8. Phantoms (Feat. Open Mike Eagle & Kendra Morris)
B1. Bomb Thrown
B2. You Masked For It
B3. Astral Traveling (Feat. Vinnie Paz)
B4. Nautical Depth
B5. Stun Gun
B6. Mf Czar
B7. Captain Brunch
B8. Sleeping Dogs