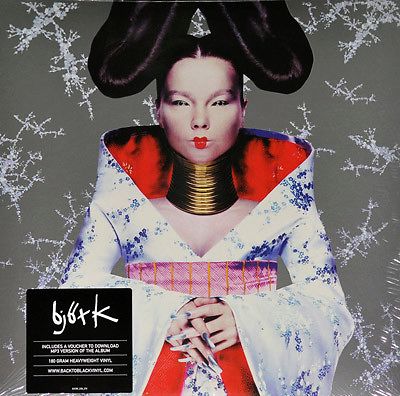 Homogenic is the third international solo album by Icelandic musician Björk, released in September 1997 on One Little Indian Records. It was produced by Björk, Mark Bell, Guy Sigsworth, Howie B and Markus Dravs. The music of Homogenic was a new style for Björk, focusing on similar-sounding music combining electronic beats and string instruments with songs in tribute to her native country Iceland. Homogenic was originally to be produced in her home in London, but was later recorded in Spain. Homogenic marked the first of several production collaborations between Björk and Mark Bell, whom Björk would cite as a major influence on her musical career.

Five singles were released from Homogenic: "Jóga", "Bachelorette", "Hunter", "Alarm Call" and "All Is Full of Love". Homogenic was highly acclaimed on its initial release and continues to be praised by critics.

Includes a voucher to download MP3 version of the album. Inner Sleeve with Lyrics.