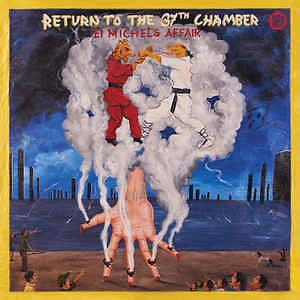 In 2015, El Michels Affair were the penultimate link in a particularly weird chain: A$AP Rocky’s track, “Wavybone,” sampled their 2009 instrumental cover of Raekwon’s 1994 RZA-produced “Heaven & Hell,” which itself sampled Syl Johnson’s 1974 song, “Could I Be Falling in Love.” But if “sample of a cover of a sample of a soul song” seems like a bizarre game of hip-hop telephone, it’d be harder to think of a more fitting participant than the El Michels Affair. The NYC lo-fi funk band became the live backup for a Raekwon tour in 2005, the same year their debut Sounding Out the City was released, and by the time Enter the 37th Chamber dropped in ’09, they’d actually gigged with members of the Wu-Tang Clan enough to have an all-instrumental album of Wu-beat covers make all the sense in the world.

Return to the 37th Chamber isn’t a more-of-the-same sequel, though. The sound is familiar—grimy psych-soul renditions of Wu and solo member classics like “4th Chamber” and  “Verbal Intercourse” are reproduced with a live-band fidelity that hews close to the spirit of the original productions while getting a little room to sprawl—but they bring a few new ideas to the plate. More oddball candidates make the cut, including the St. Ides ad “Shaolin Brew” and Ghostface’s Supreme Clientele interstitial track “Iron’s Theme” (here redubbed “Iron Man”). They slot in their own like-minded interlude cuts that expand on vintage RZA’s Stax/Hi-meets-Golden Harvest vibe (“Pork Chop Express”; “Drums for Sale”). And guest vocalists like Lee Fields (“Snakes”), Shannon Wise (“Tearz”), and Lady Wray (“All I Need”) are called in to put their own stamp on the interpolated Joe Tex/Wendy Rene/Mary J. voices that laced the originals. It’s not the homage to the gamut-running Murderer’s Row of Wu-Tang classics that its predecessor was, but Return‘s deep-dive strangeness is a complementary piece that Shaolin disciples and acid-funk enthusiasts should prize.