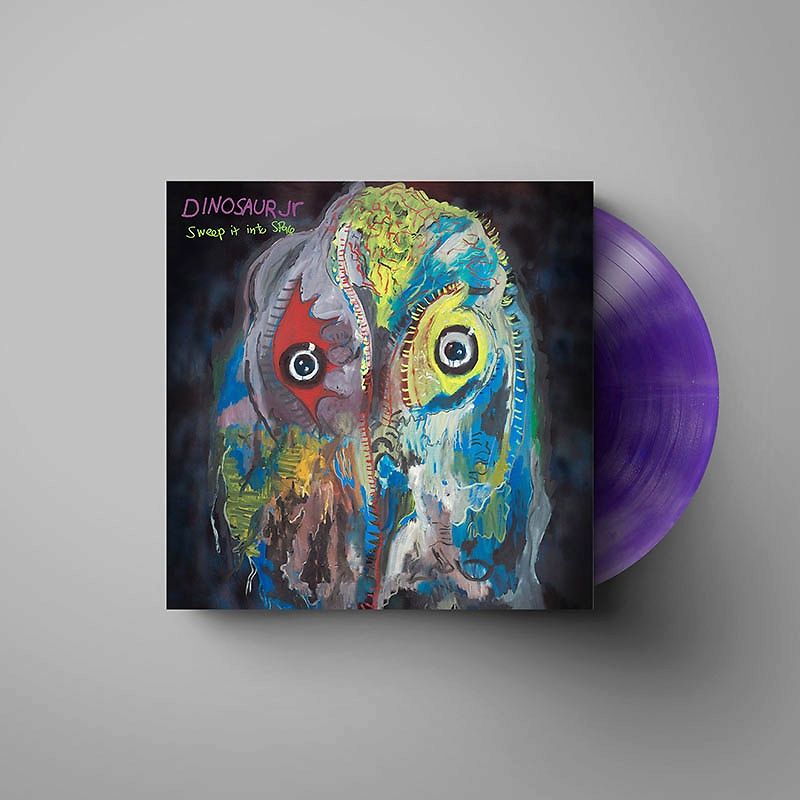 lo-fi melodies, riffs, power, beat and longing ... created with an eye on the infinite future
€ 24,95

Dinosaur Jr. return with Sweep It Into Space, their new album out April 23rd on Jagjaguwar, and a new single, “I Ran Away.” Sweep It Into Space is their first new collection of music since 2016’s Give a Glimpse of What Yer Not, continuing what is perhaps the greatest “second act” of any band ever. Originally scheduled for mid-2020, this record’s temporal trajectory was thwarted by the coming of the Plague. But it would take more than a mere Plague to tamp down the exquisite fury of this trio when they are fully dialed-in. And Sweep It Into Space is a masterpiece of zoned dialing.

In the decades since the release of Dinosaur Jr.’s original triptych of foundational albums, it has become clear that their sound, once hailed as a sort of  almost-tamed noise, is/was/always-has-been fully functioning pop music of a sort. There had always been melodies at the center of everything they did. What Dinosaur Jr. produces is nothing but a beautiful new version of the rock continuum – riff, power, beat and longing, created with an eye on the infinite future.

Recorded, as usual, at Amherst’s Biquiteen, the sessions for Sweep It Into Space began in the late Autumn of 2019, following a West Coast/South East tour. The only extra musician used this time was Kurt Vile, who co-produced the album and  played the lead 12 string on the upbeat “I Ran Away.”  J Mascis’ voice is immediately catchy over soaring, electrifying guitar lines.

After recording with Kurt got disrupted,  J Mascis “ended up just mimicking a few things he’d done. I was listening to a lot of  Thin Lizzy, so I was trying to get some of that dueling twin lead sound. But the recording session was pretty well finished by the time things really hit the fan. When the lockdown happened in March, that meant I was on my own. But it was cool.”

As is typical, Lou Barlow writes and sings two of the album’s dozen tunes (delivering perhaps his finest Dinosaur contribution in “Garden”) and Murph‘s pure-Flinstonian drumming drives the record like a go cart from Hell. Lou’s songs here are as elegant as always. J’s tracks flow and flower in the different directions he often follows. Some are guitar howlers, with a string sound midway between Hendrix and Asheton. Some are power ballads, and there are anomalies, like “Take It Back,” which starts with a blue-beat rhythm putting one in mind of Keith Richards’ Jamaican explorations (at least for a little bit.)

But there are very few moments where you wouldn’t know you were hearing Dinosaur Jr. in blindfolded needle drop. They have a signature sound as sure as the Stooges or Sonic Youth or Discharge ever did. They continue to expand their personal universe with Sweep It Into Space, without ever losing their central core.