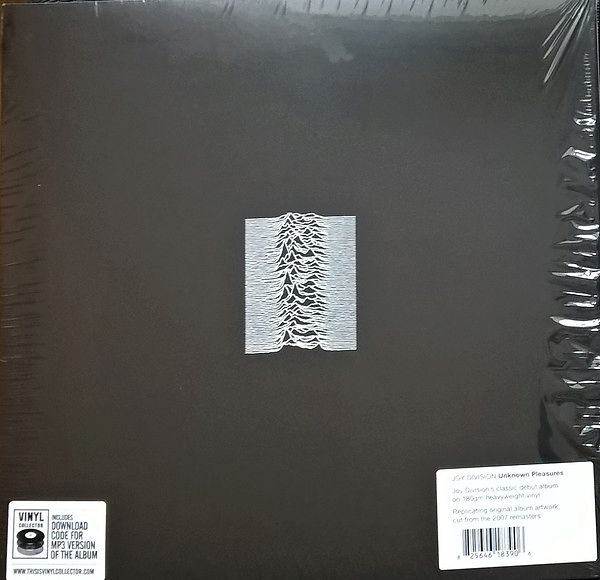 The duochrome Peter Saville cover of this first Joy Division album speaks volumes. Its white on black lines reflect a pulse of power, a surge of bass, and raw angst. If the cover doesn’t draw you in, the music will.

Following the first kick of drums and bass come the vocals: "I’ve been waiting for a guy to come and take me by the hand". This young band was the ‘guy’ to take post punk music by the hand and lead it to 80s electronica. Joy Division were unlike anything that came before them and anything that has ever come after them.

The album is at times aggressive: "And all God’s angels beware. And all you judges beware, sons of chance take good care. For all the people out there, I’m not afraid anymore," Ian Curtis intones on Insight, lapsing, at times, into despondency. Unknown Pleasures is always brooding and always intense.

Joy Division were four boys from 1970s Salford. They took their name from the literary prostitution wing of a Nazi concentration camp and they took their inspiration from the familiar atmosphere of run-down, post-industrial estates. Deep heaving baritones come out of a man so small he’d be blown away by the gust of his own voice. Together Curtis, Bernard Sumner, Peter Hook and Stephen Morris created something approaching pure energy.

On Shadowplay the guitars launch into a dimension reminiscent of the sonic dimensions that Bowie and Eno dwelt in, in the late 70s. The band’s sound is echo-y, cavernous, but thanks to Factory Records producer, Martin Hannett, never empty. By adding sound effects such as breaking glass, deep breaths, and footsteps he brings the music out of the mental torture of the lead singer and into the real world. It’s these details that keep you with it and make it feel more measured than their manic live performances. For this he was initially resented by the band.

The classic She’s Lost Control builds intensity as threatening growling is replaced with manic crescendo. It’s simple, it’s terse. Day of the Lords feels like it should accompany an Edgar Allen Poe tale, as pulsing drums and howling guitars penetrate the air towards an unknown conclusion.

Unknown Pleasure borders on nihilism, but is pregnant with expectation. And like Bowie’s Low, once heard it's never forgotten. It’s like going to the doctor and having your ears syringed. This is a sound that’s ready to explode. And it still feels personal.