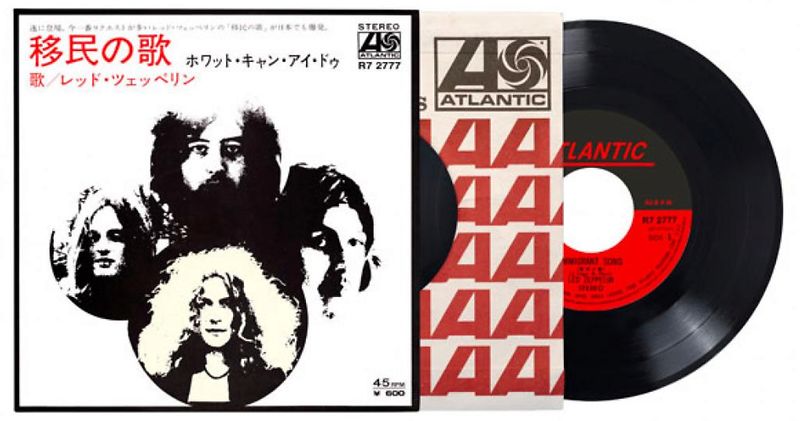 ltd 50th ann reissue with non-album track!
€ 14,95
PICK-UP AT SHOP / FREE SHIPPING FOR ORDERS WITHIN BELGIUM AND EXCEEDING € 50 (FYI: we notice delays at Bpost which are out of our hands, if you want to be a 100% sure about delivery date, best choose pick-up) / Shipping costs are dependent on various factors and are calculated in your shopping cart. Add this item to your cart to see the shipping cost. Or pick up your order at our store in Ghent.

"With great regret, Warner Music must inform Led Zeppelin fans that the “Immigrant Song / Hey, Hey, What Can I Do” 7” single has been cancelled. We sincerely apologise for any disappointment or inconvenience this may have caused. Refunds will be available at point of purchase."

In celebration of Led Zeppelin III’s 50th anniversary, the band will reissue the Japanese version of the album’s only single – “Immigrant Song” b/w the non-album track “Hey, Hey, What Can I Do” – on 7” vinyl. Limited to 19,700 copies, it comes in a sleeve that replicates the original artwork. “Immigrant Song” and its lyrical references to Norse mythology were inspired by the band’s concert in Reykjavik, Iceland on June 22, 1970. Six days later, the song made its live debut in England at the Bath Festival of Blues and Progressive Music. That fall, it would appear as the lead-off track on Led Zeppelin III.