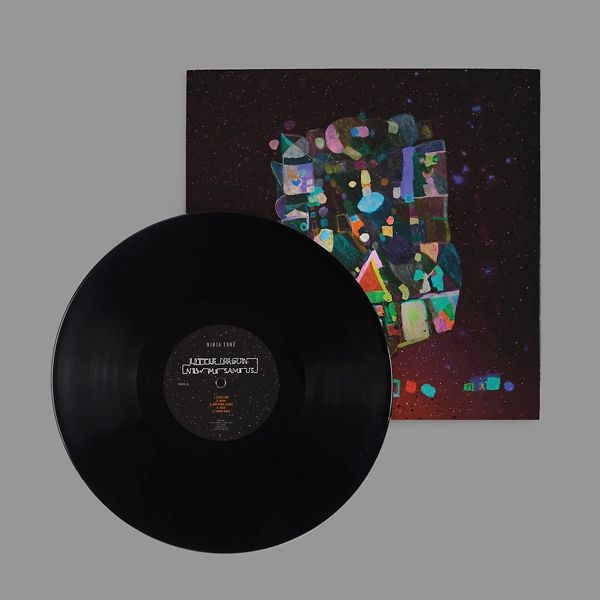 Some of their most focussed and inarguably best music to date! LP in gatefold sleeve.
€ 26,95

For a band who are proudly left-of-centre and fiercely protective of doing things on their own terms, Little Dragon have achieved no shortage of mainstream recognition. Grammy nominated for 2014’s “Nabuma Rubberband”, they have long been seen as one of the most sought-after groups to work with. Chalking up an enviable list of collaborators throughout the years, working with equally groundbreaking artists like BADBADNOTGOOD, Gorillaz, SBTRKT, Flying Lotus, Flume, Kaytranada, Big Boi (who was first put on to the band via fellow Outkast member André 3000), De La Soul, DJ Shadow, Tinashe, Mac Miller, Future, Raphael Saadiq, Faith Evans and more.

Their hugely popular and highly regarded live performances have spawned a decadespanning touring career which has seen them recently co-headline a show with Flying Lotus at Los Angeles’ Hollywood Bowl and perform at some of the world’s most revered festivals such as Coachella, Glastonbury, Bestival, Lollapalooza, Melt, Dour, Sonar and Tyler, The Creator’s ‘Camp Flog Gnaw’.

Having played together since their school days in Gothenburg—where they’d meet up after class to jam and listen to records by artists like A Tribe Called Quest and Alice Coltrane —“New Me, Same Us” is the sound of a band going back to basics and falling back in love with their instruments: drums, bass, keyboards, harp, guitar and voice, to produce some of their most focussed and inarguably best music to date. “This album has been the most collaborative for us yet.” they explain, “which might sound weird considering we’ve been making music together for all these years, but we worked hard at being honest, finding the courage to let go of our egos and be pieces of something bigger.”

Entirely self-produced and recorded at their long-term home-built studio in Gothenburg, “New Me, Same Us” represents another chapter in the continuing evolution of Little Dragon, finding new direction in their unique style of unhurried, off-kilter r’n’b, pop and electronics, they sound as rejuvenated and energised as ever. The record also finds them in a reflective mood, Yukimi’s distinctive vocals musing on transitions, longing, and saying goodbye. “We are all on our own personal journeys,” they say, “full of change, yet still we stand united with stories we believe in, that make us who we are.”

Lead single ‘Hold On’ is a message about breaking away and moving on, ‘Rush’ is about yearning for a love now lost, ‘Another Lover’ is described as a daydream of heartache, “I can’t understand what I'm doing / don't understand where we going”

Yukimi laments in the opening lines. The aptly named ‘Sadness’ speaks to “how you might think you know someone but then time shows you a new face” say the band.

‘Where You Belong’ is a lullaby of fear of loss and death. There is room for optimism too, though. ‘New Fiction’ seeks that space in which to create new narratives and forge your own path and ‘Are You Feeling Sad’ is a reminder to take a step back and not worry too much: “you gonna be alright / don’t worry don’t worry / things gonna turn out fine”.