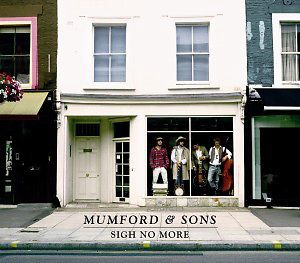 Sigh No More is the debut studio album by London-based folk-indie-rock quartet Mumford & Sons. It was released on 2 October 2009 in the UK, and on 16 February 2010 in the United States and Canada. The album entered the UK Albums Chart at No. 11 and peaked at No. 2 on 20 February 2011, in its 72nd week on the chart and following its Album of the Year win at the Brit Awards. In early 2011, the album peaked at No. 2 on the Billboard 200 in the US.

On 20 July 2010, it was shortlisted for the Mercury Prize, awarded annually for the best album in the United Kingdom and Ireland. On 15 February 2011, the album was awarded the Best British Album at the BRIT Awards.

The album's title is taken from a line in Shakespeare's "Much Ado About Nothing" and several other lines from the play appear in the title track's lyrics.

Vinyl is packed in a sleeve with song lyrics printed on it. Produced by Markus Dravs, Engineered by François Chevallier, assisted by Samuel Navel. Recorded at Eastcode Studios, London. Mixed by Ruadhri Cushnan at Rhubarb Studios, London. Mastered by Bob Ludwig at Gateway.