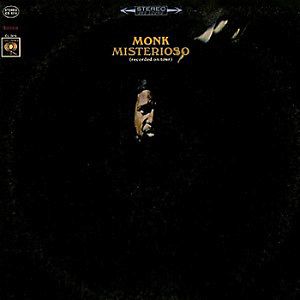 Misterioso is a 1958 live album by the Thelonious Monk Quartet. By the time of its recording, pianist and bandleader Thelonious Monk had overcome an extended period of career difficulties and achieved stardom with his residency at New York's Five Spot Café, beginning in 1957. He returned there the following year for a second stint with his quartet, featuring drummer Roy Haynes, bassist Ahmed Abdul-Malik, and tenor saxophonist Johnny Griffin. Along with Thelonious in Action (1958), Misterioso captured portions of the ensemble's August 7 show at the venue.

The album was one of the first successful live recordings of Monk's music and was produced by Orrin Keepnews of Riverside Records. According to Keepnews, the pianist played more distinctly here than on his studio albums in response to the audience's enthusiasm during the performance. Misterioso's title was meant to evoke Monk's reputation as an enigmatic, challenging performer, part of Riverside's attempt to capitalize on his popularity with intellectual and bohemian audiences.

Misterioso was originally met with a mixed critical reaction; reviewers applauded Monk's performance but were critical of Griffin, whose playing they felt was out of place with the quartet. The album was remastered and reissued in 1989 and 2012 by Original Jazz Classics, and has since received retrospective acclaim from critics, some of whom viewed Griffin's playing as the record's highlight. The saxophonist's solo during the performance of "In Walked Bud" in particular has developed renown among critics and jazz musicians.