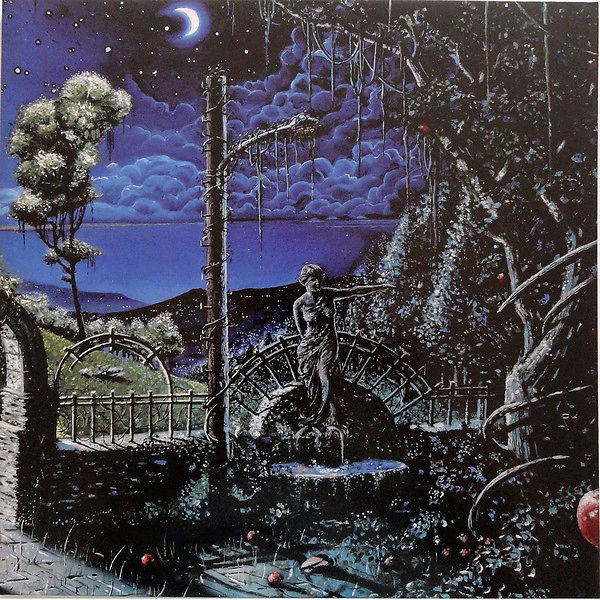 "So many years later, Masters Of Reality’s debut still feels like a hard-hitting breath of fresh air in a modern landscape of over-produced rock music. It’s in this sense of tribute that Delicious Vinyl presents this re-issue of the acclaimed record. The audio has been re-mastered, and its original "Blue Garden" artwork has been restored."

Delicious Vinyl is proud to announce the reissue of two seminal albums from Masters Of Reality together in one deluxe package. Originally released in 1988 on Rick Rubin’s Def American label, the self-titled album is being re-released this November.

Chris Goss formed Masters Of Reality with Tim Harrington as a two-piece in Syracuse, New York in 1981. A Warner Bros. pressing of Black Sabbath’s fearsome 1971 LP Master Of Reality with misprinted labels that read Masters Of Reality gave them their name. Copping the sonic assault of No Wave duo Suicide, Goss and Harrington gigged regularly at CBGB under a smutty black light haze, before expanding to a four-piece and adapting Black Sabbath’s blues-based evil deeds template as their own.

Fans of Kyuss and Queens Of The Stone Age should recognize the name Chris Goss. As godfather of the California desert rock scene that blossomed in Joshua Tree, Goss produced three thundering Kyuss LPs as well as QOTSA’s breakthrough album Rated R and their Grammy-nominated Era Vulgaris. The Masters’ legend has grown stronger ever since.

Masters Of Reality’s lead single from the self-titled release was “Domino,” a flat-out rabble rousing rocker, Goss serving up Tony Iommi-style sickness while in his pure but potent tenor commanding the listener to “Paint me a picture/ make it the devil/ then run down the hole if/ the roof ain’t level.” “Lookin’ To Get Rite” is a concise and country-fried front-porch toe tapper, while “Kill The King” is a seven-and-a-half minute regicidal epic roping in the legacies of Queen, King Crimson, and ZZ Top. Most impressive is “John Brown” where Goss brays “I declare a holiday…no matter what the doctors say” over a full-bodied realization of the sort of acoustically-strummed bombast that Led Zeppelin had pioneered with “Over The Hills And Far Away.”

Completists and come-latelys may want to know this reissue maintains the self-titled album’s track sequencing from the Delicious Vinyl version, which includes the song “Doraldina’s Prophecies” (produced by Chris Goss, Matt Dike & Mike Ross) not found on the Rick Rubin-produced Def American release. The original Def American cover art has been restored. The song “Magical Spell” is returned here to its majestic five minute lascivious trawl, missing verse, guitar solo and all.

As for the second disc, How High The Moon: Live At The Viper Room has been out of print for years, and never been available on vinyl. Its standouts include “Jindalee Jindalie” (featuring special guest Scott Weiland) and a romp through “John Brown” that betters the already awesome studio version.

More by Masters Of Reality