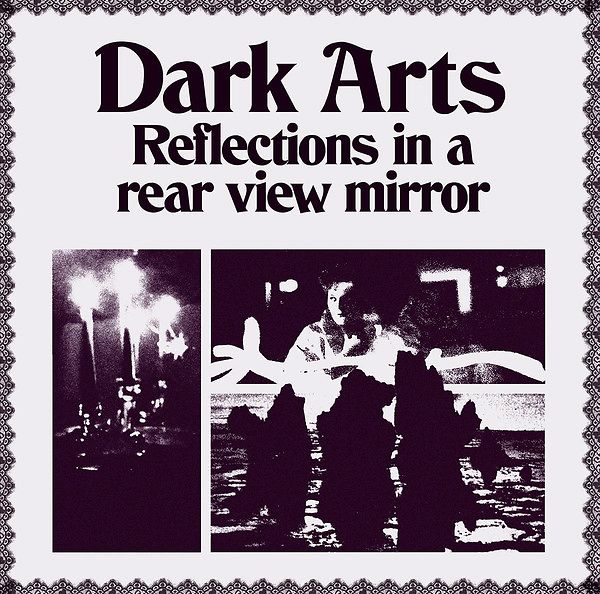 "This is an anthology, a selection of old and new. It's a collection of the past but moving forward. It's past and future."

Dark Arts is one of those bands that for some reason got lost in the shuffle. It was founded in Columbus, Ohio, by a man named Bob Katt, the "cool, older guy" who went to all the concerts in town and had been in a bunch of other bands. Initially there were five members: in '83 there was Bob on bass and percussion, singer Sue Ann Mason, drummer Dave Green, Bill Bruner on guitar and Stephanie Payne on keyboard. Katt is the one who brought everyone together and came up with the name: they were the 'art' band and they were 'dark'. Keyboard player Stephanie Payne, just like Katt, was also present at every musical happening. Young and eager, she would turn out to be the motor and musical mastermind of the group. When she decided to move to Los Angeles, California, Sue-Ann and new member Larry Altvater decided to tag along. By the time they made their first full album, on Phil Druckers (Savage Republic and 17 Pygmies) label Nate Starkman and Son, they had split up. Payne decided to move on and continued the band by herself, ever finding new musicians.

Asides from art school, promoting concerts, DJ'ing and record hunting Payne kept making music. Before Dark Arts, she played in The Girl Boys, a Janus-faced band that was either light, silly and acoustic but could also deliver a hard, dark, electric live set. The same applied to Dark Arts. Their wide-ranging music has a fey, nearly spiritual quality, drifting between folk music, ambient, Eastern European beat patterns and new wave. They were the 'art band' of Columbus, divergent, always changing their sets. They would print crafty flyers, project films and set up special lighting.

"When we played live, we would bring out lawnmowers, pots and pans and pipes we would smash rhythmically with a mallet. Anything that made noise. And then there was also the kraut-influenced, more ambient Dark Arts. I loved percussion, I loved beautiful things, but then, I could also whip out a chainsaw, you know."

Their first gig was in Bernie's Bagel & Deli, as Toy Division, playing Joy Division covers on toy instruments. Dark Arts' second show was a country and western themed performance. The next concert was held with a huge crowd, with 400 alternatives, punkrockers, people from Cleveland, Cincinnati and Payne's own mom in attendance. They were the support act for Big Black, Steve Albini's punk rock band, whom Payne had written a "big stupid collaged fan letter". He liked them and issued their first EP, A Long Way From Brigadoon on his Ruthless Records in 1985. Later that year Dark Arts opened for Cocteau Twins, who were on their first USA tour.

After the move to L.A., Dark Arts was featured on the compilation The October Country (1987), issued on Phil Druckers label as well. Because of her work in the music industry and through Drucker, Payne encountered a lot of gifted musicians. She met most of the people on Reflections in a rear view mirror through Phil or because of her work in record stores and for indie distribution companies. In 1991, Carnival of Lost Souls (Nate Starkman and Son) was mastered by Biff Sanders and with him she later on created the 7" Jola Dool (1995), self-issued on School for Barbarians. Four years later Something Once Whispered to Cava - Cava referring to Payne's cat - came out on Falçata-Galia.

"Melodies will come to me. I have a really old eighties Ensoniq ESQ-1 keyboard, it's ancient. I store sequencies in its memory banks, leave ideas in it, like snippets. Then something will just stick in my head and I go back to it and keep working on it and working on it."

For the release concert of the Cava album, she gathered a live band around her. Payne played the dulcimer, piano, percussion, flute and melodica (amongst other sound-making objects), Sharon Berman accordion, ballophone, recorder and drums and Juan Wijngaard worked his self made hurdy gurdy, the recorder, mouth harp and percussion. During those living-room jam sessions, Dark Arts' most recent work came about.

"There were always bands, before Dark Arts and after. It mattered less who I made music with, as long as I made it. Whenever opportunities present themselves, I make music. I'm forever writing music , continually meeting new people to work with. It's ongoing, it's something inside."