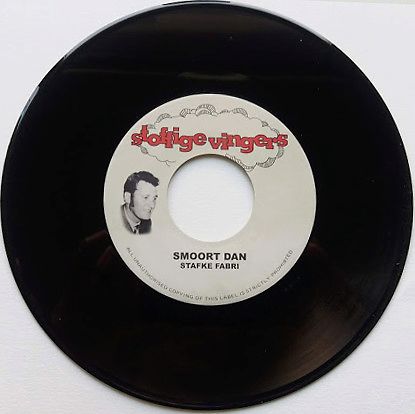 Music's a mystery; how does one song fly under the radar in its country of origin but becomes a minor hit in another place ? The driving beat of Black Slate's 'Sticks Men' hit a nerve with the Antwerp discotheque crowd in 1976 because, from popcorn to new beat, the Belgians like their dancefloor fodder laced with a lot of bass. By the way, two nice gents from Ghent called The Glimmers later featured the track on a mix CD for the legendary Fabric club.

Working class singer Stafke Fabri caught wind of said tune and quickly recorded a cover for his album 'My Joanna is crazy about bananas'. The same sought after LP carried another version of the same tune so it was only right to press it here on the flipside as a dub.

The first Dutch language reggae song ever, predating the usual hits from Holland is reissued here by the Stoffige Vingers (Dusty Fingers) label in limited amounts!