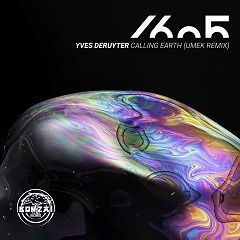 We’re excited to present our next 12” vinyl. This time, we go back in time once again with a brand-new remix of an absolute classic. Yves Deruyter’s Calling Earth was a mega hit back in the day, now in 2020, the track has been given a makeover by electronic music icon, Umek. From those early days at Bonzai, Yves has been at the forefront, dishing out countless tracks under his own name and a host of guises and collaborations. Still rocking the scene today, producing and DJing for the masses, he has surpassed 35 years as a DJ and it doesn’t look like he will be stopping anytime soon. His tracks have a tendency to find their way into modern sets, holding their own in timeless fashion. So, it’s no surprise that in 2020, Umek decided to have a go at remixing this popular track, which has been played by the likes of Adam Beyer and even got an airing on BBC Radio 1’s Essential Mix. Slovenian artist, Umek, started out in 1993. He was pioneering the sound in his country, bringing the music to the masses at such a young age. In 1999 he founded Consumer Recreation and Recycled Loops and has went on to churn out a plethora of work on other world-renowned labels. He currently runs his latest label, 1605, with great success. His fast mixing skills and uplifting sets earned him the most prestigious of gigs and has played a Radio 1 Essential Mix in 2007. A multi-award-winning artist, Umek continues to deliver the goods, and this is just one example of his genius. What is more special about this particular release though, is not only is it a limited edition, but each vinyl features a unique colour pattern. Three colours will be present, blended together in random sequences to achieve the most vibrant tapestry. This will give the records their own character and will be the talking point of many collections.

On the A-side you’ll find Umek’s Remix. Staying true to the original, while bringing in a strong, contemporary Techno vibe. The intro boasts that familiar scratchy synth before monster kick drums take over alongside a pulsating bassline. Tension mounts as the layers pile on, we’re teased with the main melody until it’s unleashed on the first break to the backdrop of a gnarly, gritty Techno pad. The second break brings in those playful percussions that track is so famous for, resolving in a slowed down tempo and then back to full-on mode for the duration.

The B-side features the glorious Original Mix. First released in 1994 as the A-side to IV (backed with Rave City). The track opened with that hollow tube sound laced with bright hats, leading to a solid, pounding beat and then on to that infectious melody line. This one quickly rose to mega status among throngs of ravers and DJ's. A string of remixes followed as well as multiple releases over the years making this the ultimate classic.