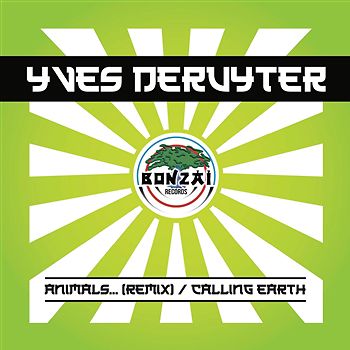 Our next limited edition coloured 7” vinyl features the mighty Yves Deruyter’s famous Animals… (Remix) and Calling Earth, both huge classics from Bonzai regarded with legendary status, just like the creator Mr Deruyter. From those early days on Bonzai, Yves has been at the forefront, dishing out countless tracks under his own name and a host of guises and collaborations. Still rocking the scene today, producing and DJing for the masses, he has surpassed 35 years as a DJ and it doesn’t look like he will be stopping anytime soon. Be the first to get this exclusive 7” in your collection by checking on our social media and website for pre-order info, you know they will not last long once released.

Animals… (Remix) saw a release on Yves’ 1993 cut titled simply, II - which came shortly after its original counterpart in 1992. This record was the epitome of the sound of the era, a sound championed by the fledgling Bonzai and its dedicated troupe of artists. Hoover synths, frantically pulsing and sweeping against a full-on thumping beat and chaotic percussion arrangement. What more could anyone have wanted in a strobe filled club or arena, a mighty track no doubt. Yves then gave us Calling Earth in 1994 which was the A-side to IV (backed with Rave City). The track opened with that hollow tube sound laced with bright hats, leading to a solid, pounding beat and then on to that infectious melody line. This one quickly rose to mega status among throngs of ravers and DJ's. A string of remixes followed as well as multiple releases over the years making this the ultimate classic.