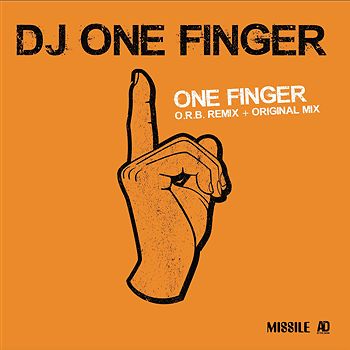 Next up on Bonzai Vinyl we have some manic minimalistic Techno on 12” vinyl with the massive club stomper One Finger from DJ One Finger. Originally released on Planet Of Drums in 1996, this one became an instant hit with the spirited club fraternity. DJ One Finger is a project by UK Acid pioneer Tim Taylor, responsible for a number of now considered classic tracks and has released under various guises on a host of labels including Missile Records, Clockwork Recordings and Red Alert to name a few. On this release we have a 2019 remix from the newly formed O.R.B., who are stirring the pot with some tasty Techno treats on the brand-new label After Dark alongside the Original Mix from 1996.

O.R.B. is a trio of old guys who are into making proper upfront Techno using modern methods with that delicious old skool flavour. CJ Bolland is considered with legendary status amongst a generation of electronic music lovers. From his early days collaborating with like-minded enthusiasts in projects such as Space Opera, Phantom, The Project and Sonic Solution to name just a few, to laying down his first studio album titled The 4th Sign which went on to become an iconic pressing. Steve Cop has contributed heavily to Techno in the early nineties. He is the other half of Sonic Solution along with CJ and we all know the top tunes they turned out under that guise. A very much in demand DJ, Steve has played all over Belgium and more recently he has been featuring in several parties held by the mighty Bonzai. Dany (Steel) is a veteran of the Bonzai posse having released tracks under Batteries Not Included and D-Bedroom Visitors well as a few cuts on sub-labels from back in the day. Dany joins forces on the decks with Steve using his Steel persona and they are regular artists on Bonzai’s party and festival line-ups. On the remix, the guys have stayed true to the original, interpreting the main hook in all its glory with a slight twist along the way. The drums pound out a solid beat that will definitely rattle the bass bins in any venue while the bright percussions will get the asses shakin’ for sure. A superb production to give the younger generation a glimpse at how Techno should be.

The Original Mix is a wonderfully simplistic construction which gives the impression that the main hook is played with just one finger, which is most likely the case, but the impact is huge and there can be no doubt that this spawned a series of copycat style tracks over the years. The hook is mesmerising, a simple trail of 16th notes that go from polished and shiny to gnarly and distorted to the backdrop of a chaotic drum arrangement that is filled with thumping kicks, shuffling percussions and noisy snares. With the current trend in rehashing the classics, this one will fit right in at any up-for-it party.