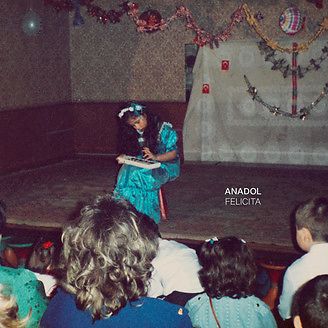 Release sadly postponed to August 19th, due to global manufacturing issues. We'll fulfill your orders as soon as possible...

“Whether it is traditional or contemporary, we need to be authentic,” says Gözen Atila who performs as Anadol. “I don't claim that I am authentic, but this is what I want to achieve.”

A sense of authentic exploration, introspection and celebration coats every inch of Anadol’s latest album. After 2019’s Uzun Havalar, the Turkish artist returns with an album that continues to explore a variety of deeply embedded musical traditions while also hurtling into new terrain.

The music and influences - as well as the history, culture and geography behind them - that make up Atila as an artist all coalesce to create something entirely new. The result is something that is simultaneously exploring history and tradition, while harnessing innovative modern sounds and techniques. “If there is any tradition I am somehow connected to, or influenced by, then it’s multi- genres,” she says. “Such as Turkish Pop and Arabesk music from this country where I grew up. There is a connection to Folk and also French pop or Flamenco, Middle Eastern melodies and orchestration, Greek adaptations, Kenny G. solos, American guitars.”

This can be heard on Felicita, not in as much as you can link up the influences directly but in the way it glides across genres, eschewing convention and predictability along the way, to result in a kaleidoscopic experience. For the album, Atila found a talented roster of Jazz musicians in Istanbul who she recorded on top of her synth productions and field recordings. Soon enough saxophone, drums and strings began to stack up against preset drum loops from vintage organs. It’s a record where woozy psychedelic excursions bleed into dreamy synth lines, immersive ambience and the occasionally disconcerting yet incredibly tactile use of field recordings.

If it’s an album that feels like it travels through a variety of feelings, then it’s because the concept is loosely rooted in such a journey. Felicita translates as “happiness” and this album is something that explores the complexities of such an emotion. “I did not name the album like this because I just wanted to call it happiness,” Atila says. “A song like ‘Felicita Lale’ is a sad and confused song about a female character who can't get out of bed. It’s a funny rumination, in her thoughts, saying to get up and lie down repeatedly. At some point the lyrics say: "hep agla, felicita", meaning: "Cry all the time, Felicita". Like she is talking to happiness itself and telling it to cry. So it is not about happiness, it is more about the concept of happiness which can be very sad.”