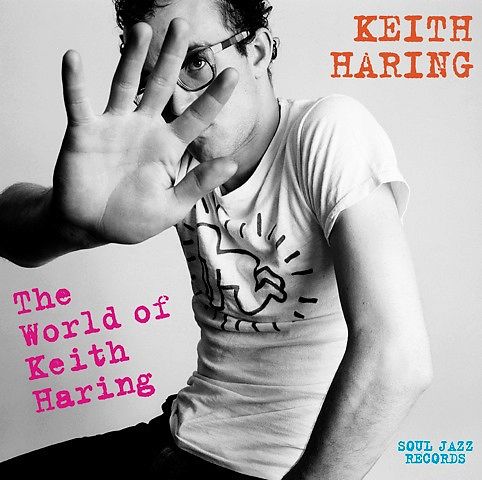 Like a mixtape that reflects Haring’s wide-ranging musical influences and connections. Big tip!
€ 36,95

ABSOLUTE MANIA-ESSENTIAL: Keith's legacy lives on in the public artworks he created, memorable collaborations with everyone from Vivienne Westwood to David Bowie, and the work of the Keith Haring Foundation, which funds non-profit organisations to educate disadvantaged youth about HIV and AIDS.

The album comes as a 3xLP + download code in deluxe artwork and with original photography, extensive sleevenotes and interviews.

About the music: The music collected on The World of Keith Haring is a combination of rare disco, early electro and New York punk/dance tracks reflecting the vibrant and hybrid world of downtown New York in the 1980s.

Together these are some of the tracks first heard in New York’s prolific underground club scene of the 1980s – including Club 57, The Mudd Club, Danceteria, Hurrah, Area, The Fun Club, Tier 3, The Palladium, Roxy, Pyramid and Paradise Garage. Haring was a regular face at many of these clubs, often a creative participant, both shaping and defining the cultural identity of downtown New York.

Also included is a track by the long-standing French experimental group Art Zoyd. ‘Sortie 134’ made as part of the music for ‘Le Mariage du Ciel et de L’Enfer’ (‘The Marriage of Heaven and Hell’), a ballet created by Roland Petit, choreographer at the National Ballet of Marseille, based upon a collection of pose and poetry by William Blake. As one of many works that Haring took on in Europe at the time, Petit commissioned the artist to create a massive 100-square metre backdrop painting for this show.

The selection of music on this collection is itself like a mixtape that reflects Haring’s wide-ranging musical influences and connections. And for someone who neither DJ’d nor played in a band he had impeccable musical tastes.