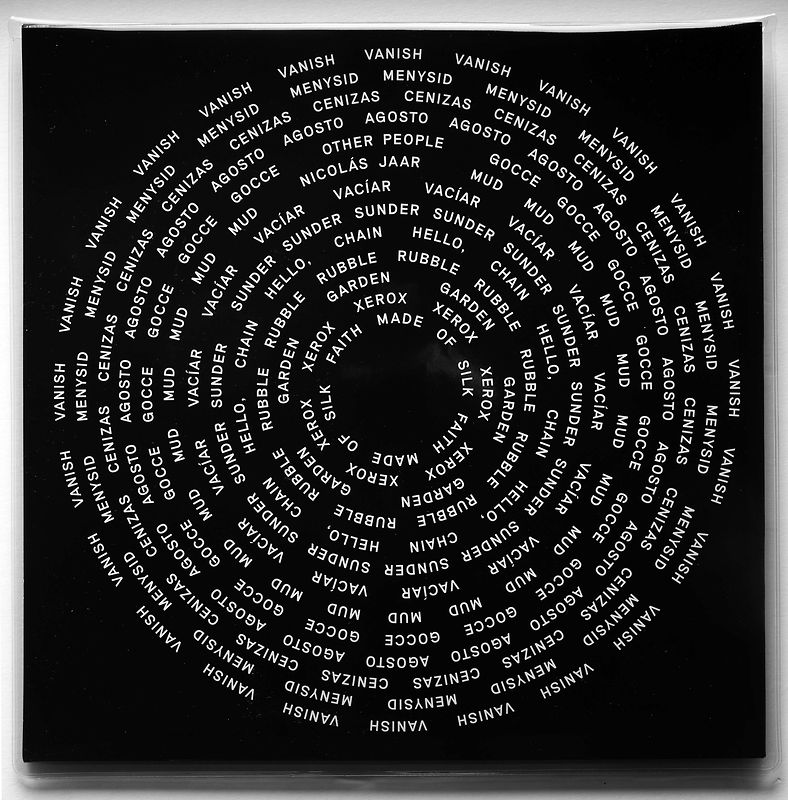 CENIZAS WAS WRITTEN AND PRODUCED BY NICOLAS JAAR BETWEEN 2017-2019. MASTERING BY RASHAD BECKER ART BY MAZIYAR PAHLEVAN

* In 2019, Patrick Higgins and Nicolas Jaar mixed some of the record in Higgins’ Future- Past studios in Hudson NY and Electric Lady Studios in Manhattan. Additional mixing was done in Figure8 Studios in Brooklyn by Nicolas.

13 Faith Made of Silk

NICOLAS JAAR is a Chilean sound maker born in 1990. He is known in the club world for his various dance 12 EPs and remixes he put out from 2008 to 2011. Since his first full length (SPACE IS ONLY NOISE, 2011), he has embarked in multiple divergent path.
For the last 7 years, he has released a large volume of recordings through his label OTHER PEOPLE (including music by LYDIA LUNCH, WILLIAM BASINSKI, PATRICK HIGGINS, DJ SLUGO, LUCRETIA DALT, PIERRE BASTIEN & TOMAGA, VTGNIKE and others).
In 2015, Nicolas scored DHEEPAN by director JACQUES AUDIARD (winner of the Palme d’Or at Cannes 2015).
In 2016, Jaar launched THE NETWORK, a web of 111 fictional radio stations done in collaboration with artists JENA MYUNG and MAZIYAR PAHLEVAN. A batch of these mixes was aired on NTS radio. In 2017, THE NETWORK became a book, published by PRINTED MATTER In NY.
In the spring of 2019, Jaar was commissioned for a 9 hour improvisation in the OUDE KERK CHURCH in Amsterdam which he performed alongside two organists and a dozen surround speakers pointed at the ceiling of the church.
Nicolas is currently curating a residency for sound artists in the West Bank that takes place in a 130 year-old converted food storage shack in Bethlehem (within the DAR YUSUF NASRI JACIR FOR ART AND RESEARCH .) Residents so far include composer SEBASTIAN JATZ RAWICZ and researcher and artist ROLANDO HERNANDEZ.
In the fall of 2019, he presented INCOMPREHENSIBLE SUN, a sound and light installation in a 200-meter-long ex-military shooting range in Zaandam (The Netherlands) and RETAINING THE ENERGY, BUT LOSING THE IMAGE alongside artist VINCENT DE BELLEVAL which consisted of 10 large rotating parabolic reflectors that capture and emit hyper-focalized surround sound.
For the first SHARJAH ARCHITECTURE TRIENNALE (curated by ADRIAN LAHOUD IN 2019) Nicolas performed a piece for 16 buried speakers in the desert near the MLEIHA ARCHAEOLOGICAL CENTRE.
Nicolas has collaborated with artist LYDIA OURAHMANE (MUSIC FOR TWO SEAS, Stromboli), FKA TWIGS (MAGDALENE), and PATRICK HIGGINS under the name AEAEA. He is also a current member of improvisational ensemble ¡MIERCOLES! alongside dancer and choreographer STEPHANIE JANAINA, founding member of research collective SHOCK FOREST GROUP, and half of the band DARKSIDE

8.0 Pitchfork - Given all the technical ground Cenizas covers, Jarr is an impressively meticulous guide. Every pluck, ping, buzz, scratch, and whistle is intentional, a bump in the tunnel as you slide down the rabbit hole

9/10 Loud & Quiet - Jaar’s music has always been deeply preoccupied with atmosphere, and Cenizas is a deeply atmospheric album. It sounds like a void. As you listen, you feel like you could fall into it and never find your way out. In that way, these 54 minutes feel like a sequel to Jaar’s first hit, Space is Only Noise, set 5,000 years in the future. He told us then. He’s showing us now.