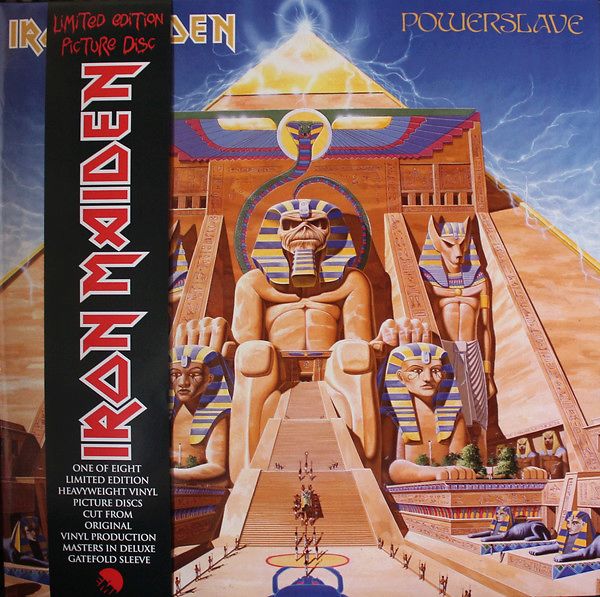 Powerslave is the fifth studio album by the English heavy metal band Iron Maiden, released on 3 September 1984 on EMI in Europe and its sister label Capitol Records in North America.

It is notable for its Ancient Egyptian theme displayed in the cover artwork, lifted from the title track, which was carried over to the album's supporting tour. The World Slavery Tour began in Warsaw, Poland on 9 August 1984 – and is widely regarded as being the band's longest and most arduous to date – and also led to the live album Live After Death.

The release also contains a musical re-telling of Samuel Taylor Coleridge's The Rime of the Ancient Mariner, which uses pieces of the original poem as lyrics. At 13 minutes and 45 seconds in length, it was Iron Maiden's longest song for over 30 years, until it was surpassed by the 18-minute "Empire of the Clouds" from the 2015 album, The Book of Souls.

Powerslave is also notable as being the band's first album to feature the same personnel as their previous studio release. This lineup would remain intact for two further studio releases. Also, it is their last album to date to feature an instrumental piece.

"2 Minutes to Midnight" and "Aces High" were released as singles. In 2017, it was ranked 38th on Rolling Stone's list of "100 Greatest Metal Albums of All Time".