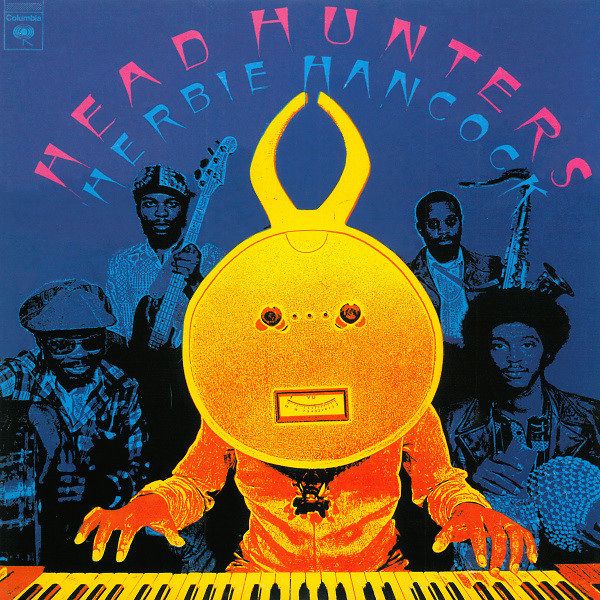 The 1973 album that brought jazz-funk to mainstream attention. Ultimate clasic!
€ 26,95

Head Hunters followed a series of experimental albums by Hancock's sextet: Mwandishi, Crossings, and Sextant, released between 1971 and 1973, a time when Hancock was looking for a new direction in which to take his music:

"I began to feel that I had been spending so much time exploring the upper atmosphere of music and the more ethereal kind of far-out spacey stuff. Now there was this need to take some more of the earth and to feel a little more tethered; a connection to the earth. ... I was beginning to feel that we (the sextet) were playing this heavy kind of music, and I was tired of everything being heavy. I wanted to play something lighter."

For this album, Hancock assembled a new band, the Headhunters, of whom only Bennie Maupin had been a sextet member. Hancock handled all synthesizer parts himself (having previously shared these duties with Patrick Gleeson) and he decided against the use of guitar altogether, favoring instead the clavinet, one of the defining sounds on the album. The new band featured a tight rhythm and blues-oriented rhythm section composed of Paul Jackson (bass) and Harvey Mason (drums), and the album has a relaxed, funky groove that gave the album an appeal to a far wider audience. Perhaps the defining moment of the jazz-fusion movement (or perhaps even the spearhead of the Jazz-funk style of the fusion genre), the album made jazz listeners out of rhythm and blues fans, and vice versa. The album mixes funk rhythms, like the busy high hats in 16th notes on the opening track "Chameleon", with the jazz AABA form and extended soloing.

The album was a commercial and artistic breakthrough for Hancock, crossing over to funk and rock audiences and bringing jazz-funk fusion to mainstream attention, peaking at number 13 on the Billboard 200.