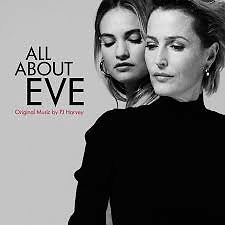 Composed, produced and performed by PJ Harvey. 180g vinyl in heavyweight deluxe sleeves + download!
€ 29,95
PICK-UP AT SHOP / FREE SHIPPING FOR ORDERS WITHIN BELGIUM AND EXCEEDING € 100 (FYI: we notice delays at Bpost which are out of our hands, if you want to be a 100% sure about delivery date, best choose pick-up) / Shipping costs are dependent on various factors and are calculated in your shopping cart. Add this item to your cart to see the shipping cost. Or pick up your order at our store in Ghent.

Harvey began her collaboration with theatre director Ivo van Hove in late 2018 for a modern stage adaptation of the classic 1950 Academy Award-winning film, All About Eve. The play, starring Gillian Anderson (X-Files, The Fall, American Gods, Sex Education) and Lily James (Mamma Mia! Here We Go Again, Baby Driver) will run until May 11 2019 at London’s Noël Coward Theatre in the West End.

This album contains 10 original pieces of instrumental music as well as two new songs written by Harvey and sung by Gillian Anderson and Lily James. Harvey’s score for All About Eve, is performed by herself, James Johnston and Kenrick Rowe, and uses Franz Liszt’s ‘Liebesträume’ (a musical element of Joseph L. Mankiewicz’s original 1950s classic film) as a musical touchstone, exploring the more somber and deeply psychological aspects of the story. The album is produced by PJ Harvey, with additional production and mixing from Adam ‘Cecil’ Bartlett

On composing this score, Harvey says, “I have always loved stories, and so to compose music to support and enhance a story being told is a challenge I enjoy. I also love the freedom that working instrumentally can give me without the constraints of song form.”

“For All About Eve I chose to work with my long-time collaborator James Johnston as he has a soulfulness and sensitivity to his playing that inspires me. I also worked with Kenrick Rowe who has a versatility to his drumming I knew I could experiment with until I found what was right.”